My Gear: NO ZU 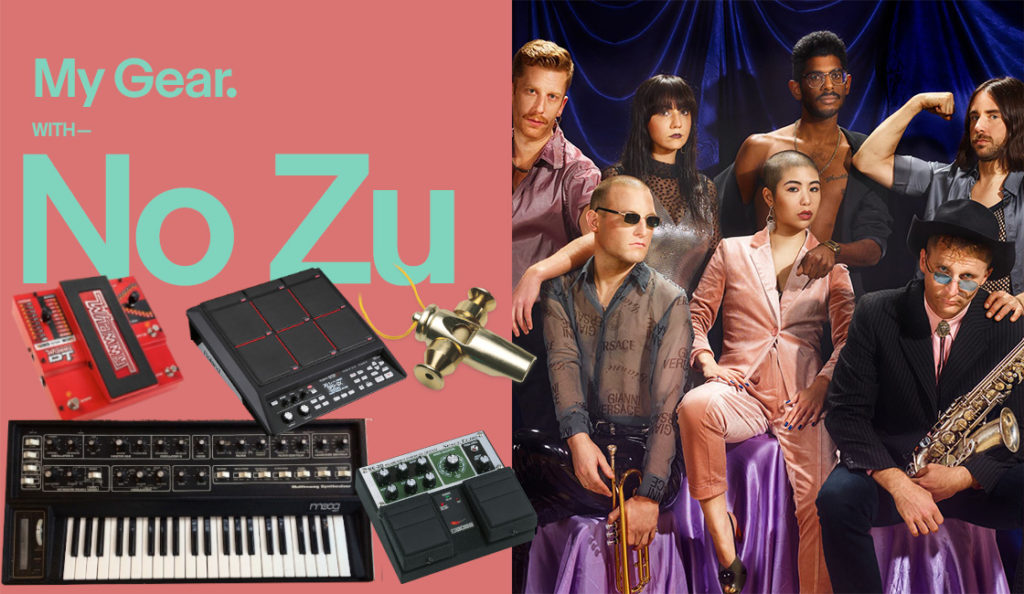 There are very few bands in Australia right now that could claim to compete with the unstoppable, sweaty energy of NO ZU. Led by Nicolaas Oogjes on vocals, trumpet and percussion, the band has featured upwards of 12 rotating members over it’s almost decade-long reign over the Melbourne party and festival scene. Taking influences from bands such as ESG and Talking Heads, NO ZU’s sound is a mish mash of found objects and instruments, musical experimentation and hectic vibes. Noisegate caught up with Nicolaas to learn more about the incomparable musical oddity that is NO ZU…

Big/the kitchen sink. Well … currently we have myself singing through TC Helicon pitch shifter, delay and reverb and another mic with a Boss Digi Delay that I can warp and modulate my yelping and wailing delays for. I play trumpet through that mic also. Recently the SPD-X got the call-up for some 808/909 sounds and samples from a new song of ours (from the film Body Melt and Mad Dog Morgan). I also play percussion – LP timbales, bongos, bells and cheap and nasty found objects. Did I mention the samba whistle? Daphne and Maddie play hand percussion and sing with Nao Anzai dubbing out the sound with delays and reverbs from the desk. Cayn plays alto sax (Yamaha – YAS82ZS) through pedals (TC Helicon Voicetone, Boss RE-20 Space Echo, Electro-Harmonix Stereo Memory Man with Hazarai). He has also been playing some guitar lately. Mitch plays percussion which includes; late 70’s Gon Bops conga and quints sized congas and matching bongos, an assortment of LP, Meinl and no name bells and things. Max plays a Taishma baritone sax and Selmer alto sax. He runs it through a Digitech Whammy DT, MXR Carbon Copy and a JHS Colourbox. Dan plays a custom made one-off trumpet. Sashi plays a Japanese, mid-80’s Fender Jazz Bass and uses a Boss Octave pedal OC-3 and Boss Synth Bass pedal SYB-3. Andrew plays a beat up purple Pearl Export with a Ludwig snare hats and ride cymbal, Dingbat and Nimrod triggers, Roland SPD and backing tracks. Tif is using a Juno-G and running Mainstage program. From the sound desk, when Nao gets the chance, he uses Andrew’s kick drum to trigger a Yamaha CS30 bass note. He also likes to use noise from a Moog Multimoog and TC M300 + Korg Kaoss Pad Mini for live dub mixing. He prefers an analogue mixing console (Midas Heritage, Soundcraft Series 5 etc) for NO ZU mixing.

Our live set-up is more practical… near enough is good enough and if it’s good-wonky, or off or rude in a good way then that’s exciting. We’re very open to it being different sonically from recordings. I don’t believe that there needs to be a definitive version of a song, especially when it comes to pretty freaky groove music. So practically this means that synth sounds can be different, percussion can be different, bass sounds can be different and live controlling of effects should be different. I guess the other thing to add is that in recording, especially the endless overdubbing and experimenting that occurs whereby any house-hold item, discarded metal objects, cheap synths and so on get used – who’s got time to try to recreate that live? That reminds me of ‘clever’ music, which we are the total opposite of, haha. It’s important that it remains visceral and intuitive live. Things must be able to go wrong for there to be an anxious tension in the music.

In one way, yes. The only thing that has remained exactly the same since 2009 (!!!) is the Boss Digital Delay pedal that I run a mic through for my falsetto-ish yelps and coos and bad trumpet playing. Since our Afterlife album there were electronic snare sounds, vocal effects and so on that were very deliberate so they remain the same live. The type of gear needs to remain the same (congas, bongos, horns, synth, bass, drums etc) but particular models can always change. As I said previously, as long as the spirit of the sounds from recordings are present they can always change and mutate and become something new. I’m obsessed with the natural live (d)evolution. So many of the tracks are much better now dynamically than when they were recorded because we have lived with them for so long, stretched them out, melted them down and beat them into new shapes. In general, thinking about a NO ZU sound is less about gear and more maintaining certain ratios of elements like weirdness, deepness, punchiness, mood and other airy-fairy, mirage-like illusionary things that I can’t explain.

The first thing that was my own thing was a very cheap drum kit. Maybe I was 14 or so. The brand was Dolphin… it was horrible despite all of the punk band stickers I put on it. The neighbours hated it and also me for having it. The only person that ever sounded any good on it was Mitch, our now percussionist. He sounds good when he plays any drum.

Honestly, I don’t have anything. I only love beautifully designed and high quality instruments in the same way that I like well-designed furniture. I just don’t have the money to dream too big either. NO ZU has always really been about making do with the things around us. Luckily, various members, friends and, importantly, band riders have great and/or serviceable gear. People would laugh at some of the “instruments” used in NO ZU recordings… there is no distinction between high and low brow much like the music itself. I wouldn’t mind a big gas cylinder much like Hunters and Collector’s ‘wang’ on their first record actually…

Keep up-to-date with NO ZU: