This Player Profile comes from guitarist, Dad, Café owner and all round good dude, Jake Weber. Jake gives us an insight on his songwriting & touring life in Harlott, as well as some info on what gear he is using.

What sparked your interest in learning guitar?

A good friend from primary school had already been playing for a few years, he came from a musical family. He looked & sounded so cool & I wanted in on that action! I had always leaned towards classic rock bands with red hot players & songwriters as a kid like The Eagles, BTO, Creedence Clearwater & Steely Dan. I guess it was meant to be, so I started lessons when I was 14.

What’s your approach to songwriting? Do you have any tips or tricks to help maintain your inspiration and workflow?

I write a lot, more than I actually practice. That could be a good or bad thing depending on how you look at it and what you want to achieve.

I’ve always found it really interesting how particular bands or artists piece songs together, it’s just as big of deal as how a riff sounds, I definitely study that. How do they make a song longer but still captivating? Do they repeat sections? Do they ever come back to that intro riff or was it just a one off? How do they get to that hook?

I also tab and/or record every little idea I have. Whether it’s 8 bars or half a song, I have at least 5 albums worth of full songs & endless ideas. Some a lot better than others, but I can’t bring myself to delete them.

More times than I can count I’ve been able to reference my idea library & suddenly something I’ve been stuck on is saved by a 2 year old idea.

What’s the current live rig? How much does it differ to your studio setup?

My live rig is crazy simple. I run an EVH 5150III LBX with a TC Electronic Mini Spark in the FX loop, and that’s it! My Jackson guitars are all equipped with a Seymour Duncan JB in the bridge. It’s an absolute classic that gives me everything I need.

At home I use mainly Line 6 software to record, as well as some Positive Grid stuff too.  I use the same guitars because they rule. I love guitars. 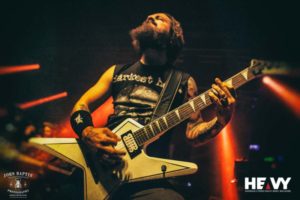 Harlott has done some heavy touring lately, do you have any advice to give to musicians and bands?

You can totally throw caution to the wind, shred hard, have fun & be happy. That’s awesome! But if you’re looking to do a little more & maybe be around in a few years time, then someone in the band having an idea how business runs is very important. That’s how anyone is surviving out there.

Being in a band can be a money pit, it’s inevitable and sometimes unavoidable. So, get an ABN, a band business agreement, do your tax & run it like a business. There is money there and so many bands overlook it because they think it’s not important or doesn’t apply to them. Also, ask for help/advice. Each state’s government & its art sections have great people waiting to help artists, you just have to be savvy & find them.

On a less serious, but important note: Be professional!

Read the run sheet, load in when you’re supposed to, get on & off stage when you’re meant to etc. It’s common sense stuff & can have a pretty big effect on what does or doesn’t happen for you.

Harlott has 3 killer shows left for the year. New Dead Fest in Adelaide with The Black Dahlia Murder, Aborted, Amped II at Cherry Bar in Melbourne & Steel Assassins in Sydney. Then the band will be busy writing album #4. I’ve also been writing & demoing for a new thrash/death project with some dudes from around the country so hopefully that’ll be off the ground sooner rather than later.