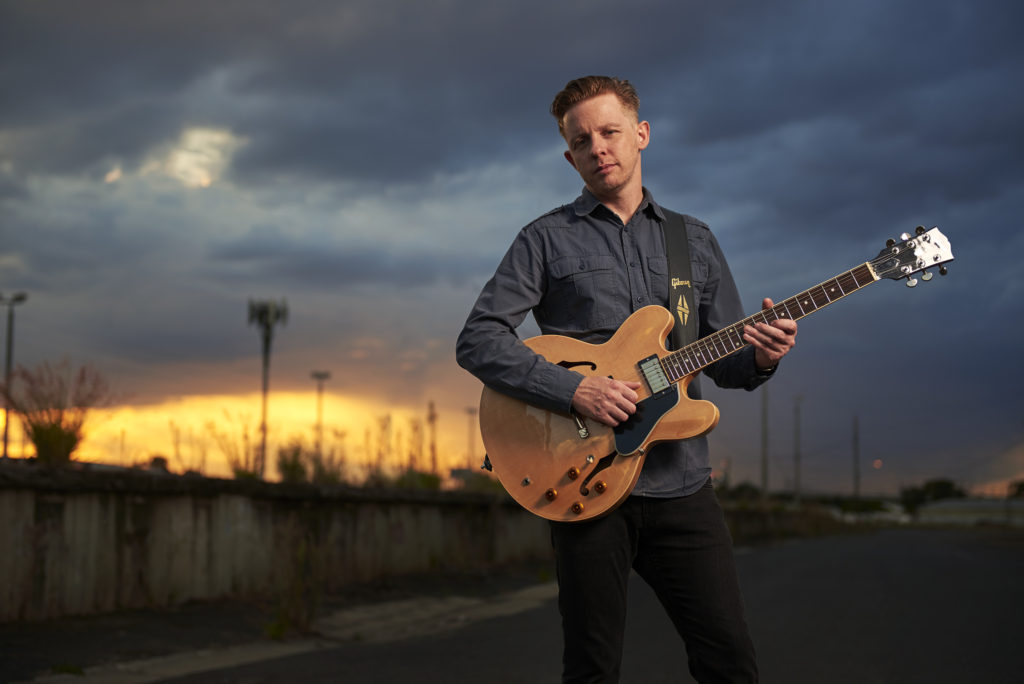 Melbourne guitarist Neil Hawker has just released his debut Blues/Soul record ‘South By East’, we take a minute to ask him 5 questions on recording this Album and more… –

I’d have to say Robben Ford, Keb Mo, Larry Carlton, Freddie King, BB King and the like. Basically a mixture of influences from both the more sophisticated harmonic camp as well as the blues legends that famously dug in hard. And I’d played in jazz groups, often in a Hammond trio, in the years leading up to writing South By East’s songs, and all the stuff I learned doing that came out in the arranging process.

I’d also been studying the lyrics of Bob Dylan, and songwriting ideas of Jimmy Webb for a few years prior. The aim was to bring that to the blues, too.

What / who was it that made you first pick up guitar?

My older cousin introduced me to a lot of music, particularly hard rock and heavy metal of the 80s (true!). And I’d been playing keyboards as a kid, which didn’t really light my fire, so when it came time to choose an instrument to try in early high school, I gave the guitar a crack. I was really more attracted to the bass at first, but from memory, I think the guitar lessons in my area at the time were about two bucks cheaper than bass lessons! So, guitar it was.

I borrowed a neighbour’s nylon string, and I’d often drag one of the school’s beaten up Yamaha C40s home, most of which had the top or back held together with silver tape, because the other kids used them as cricket bats in the classroom. I played what was popular at the time—Eric Clapton’s Unplugged stuff, Metallica, everything that was huge in the early 90s—and then I was introduced to the rock guitar player’s blues gateway drugs in Gary Moore and Stevie Ray Vaughan. Along with that, was Eddie Van Halen, Frank Gambale and Eric Johnson.

And then going into formal study, I discovered Larry Carlton on an instructional video and the album ‘Last Nite’, and that was it, a whole new world of playing the guitar: harmony, phrasing and using my ears better. It was really him and Robben Ford who opened my ears to everything that came before them: Albert Collins, Wes Montgomery, Joe Diorio, Miles Davis, John Coltrane, McCoy Tyner, Grant Green, Kenny Burrell, Mike Bloomfield, Dr John etc

What is the best & worst musical purchase you have ever made? (Gear /CDs / Gigs / Merch)

The best would actually be my recent purchase of a used ’06 Gibson Les Paul Standard, a nice and simple slab of mahogany and maple that’s full of unfussy good vibes. I found out afterwards that it belonged to Aussie guitar legend John Dallimore. I feel like I can play it pretty hard, and it just gives it all back to me and then some.

The worst, a two-way tie between my old Danelectro chorus pedal and the Buzz Feiten tuning system on my Strat, which I had removed. The chorus pedal was thirsty; it required two 9-volt batteries every week, or a separate power supply than all the other pedals. Really not worth the way it sounded! And the Feiten tuning system introduced me to the world of annoying and fiddly strobe tuners. Again, a separate tuner for that guitar only. The system does work, but I found it not worth the trouble.

I’ve discovered a lot of newer stuff over the last few years, mostly via Spotify, and I’ve bought all the music: Damon Fowler, Kirk Fletcher, Matt Schofield, Jon Herington’s solo stuff (from Steely Dan), and the California Honeydrops. But it’s Jimmie Vaughan that’s getting renewed love in the car and on the headphones at the moment; the guy can write amazing songs with just a I IV V progression, great lyrics and a super-cool band.

And I usually spin Ray Beadle every couple of months, too, every time I get cocky about my playing, haha.

What’s next for Neil Hawker?

The album launch at the Spotted Mallard, Melbourne (Brunswick) on November 9, and then I’m gonna try and take South By East to as many places as possible over summer and beyond.[/vc_column_text][vc_separator][vc_column_text]Follow