Sydney’s Gravel Pit are a band you hear in the other room at your rehearsal studio and think, “what on Earth’s going on in there?”. If you cracked the door and had a look, you’d see 3 men (Rivals, Martino and Adam) doing things with soundwaves that are difficult to grasp. Ok, Martino plays drums, that’s fairly easy to comprehend — but the rest? That’s a bit more of a mystery. There’s synths, pedals, microphones, computers and a buttload of cables — coming together to create a sound that could best be described as..well, unique. In the best way possible. Having just released their new EP Albert (named after the first primate in space) we had a chat with Rivals about how this is all done.

G’day Rivals, you guys have an incredibly unique sound. Distorted, melodic, inventive, grim, slightly nostalgic and downright weird. Where’s the inspiration coming from for this sound? It sounds like at times your equipments sound design capabilities feeds the inspiration, would you agree?
Most definitely, I have always been attracted to unusual sounds and ways to create them in an organic way. Initial inspiration behind our sound was bands like HEALTH, Battles and the ‘drums not dead’ era of Liars. We loved how these bands could use live instruments and effects parings to create something otherworldly and unique. The first year of Gravel Pit was mostly comprised of myself and Martino grabbing any gear we could find and experimenting with setups to see what could work in a live setting rather than a studio. If we couldn’t do it live it wouldn’t get done. This rule still applies in our current production setup.

Take us through how the cacophony of your new EP “Albert” is recreated on stage. There’s a lot going on, it must be tricky. Who’s doing what and with what?
Our current setup is actually the simplest setup we’ve ever used. This is partly due to each member having their own setup as opposed to everything running off/through my rig as we’ve done in previous iterations.
Adam (vocals/fx) has an ever changing collection of pedals that he runs straight to front of house. Martino has his drum kit mic’d up for front of house as well as some drum triggers that send a signal over to my setup, where I have some distortion pedals, synth modules and delays that add additional texture depending on the song or feel.
I run a complex Ableton Live setup of various ins and outs through a Steinberg UR44. Signals are received from both Martino and Adam where I can add effects, looping and remanipulations of their signals on the fly. My Ableton setup has a number of weird vocal chains that I use for looping harmonies and feedback loops during the noisey and improvised parts of our set.
The UR44 also sends MIDI to my Korg Minilogue that is fully mapped in Ableton so that I never have to touch settings once in a set. The Minilogue’s a fantastic live synth that is capable of doing pads, leads, thick bass and blips, I love it. I run it through a modded EHX Big Muff and an Old Blood Noise Dark Star Reverb.
I also use a Roland SpdSX that I load synth stabs and found sounds into, when combined with its on-board delay function it almost plays like a granular synth. Despite all this running under the hood the sound person only receives three channels to mix, one representing each member of the band.

Rivals’ Big Muff has been modfied to have a clean blend circuit and a mid boost/cut switch.

Recording an EP like Albert has gotta be a fairly unique process compared to recording a run-of-the-mill guitar/drums/bass band. What was the process like?
It was actually pretty straightforward this time around. Our producer/engineer Tim Carr is a genius and understands how to interpret vague ideas thrown at him on the fly. The majority of Albert was recorded live with Martino and myself recording our parts simultaneously. We avoided using a click on this recording as a lot of the themes were loose and emotional.
We wanted a contrast of dirty and clean vocals, so we setup Adam with his pedal board in the live room with us, his vocals coming through a guitar amp while simultaneously sending a clean grab straight to the desk. Tim wanted us to create a natural bleed of clean and effected vocals — the natural reverb of the room being the glue that made it all stick together. 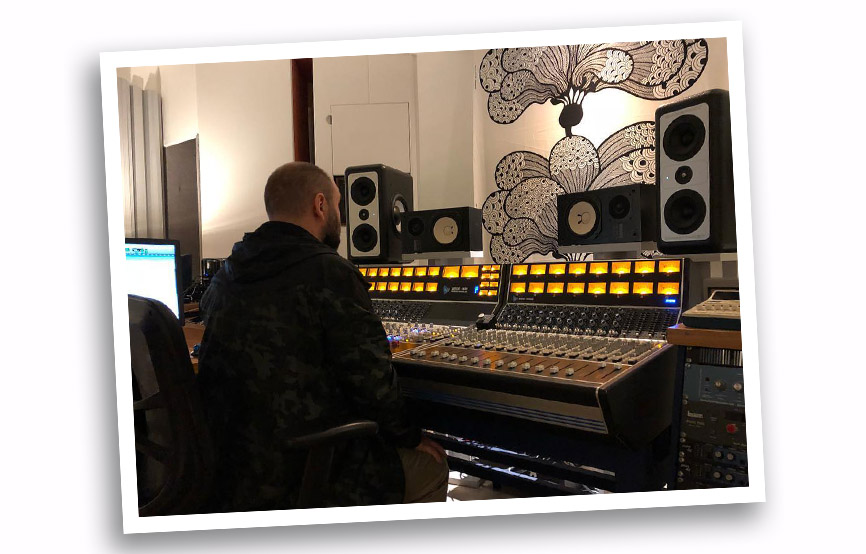 Was there any one piece of gear that was the “star of the show” on “Albert”?
On this release we wanted a balance between all the elements,  to have everything be heard but nothing stand out. But in saying that…. Space Echo, more Space Echo! Tim can we have more Space Echo?

Tell us a bit about your writing process. How does one write music like this in a band format? Do you find it happens organically when you’re in room together or do you tend to have a fairly complete sketch of a track via email etc by the time you actually get in a room together?
We kind of just jam like any other band would. Martino or myself will starting playing an idea we have and Adam will furiously start scribbling down notes as we loop ideas together. The theme of Albert was contrasts between light and dark and we kept this in mind when writing songs for the release. One of the joys of having everyone’s signal run through my Abelton setup however is that I can hit record at anytime and grab all our signals for reference later. No more, hey how did that go again?

Any gigs coming up? Where can we witness all this in the flesh?
Absolutely, our next show will be in Melbourne on October 12 with our best Sydney noise pal No-Fi coming down for the ride. Uboa and Youngdeath will be representing Melbourne’s weird and wonderful left-of-centre electronic and noise scene.

Albert is available via all major streaming platforms.