BIGSOUND is less than a week away and the final program has been revealed with many exciting bands, panellists and events added to the already packed schedule. BIGSOUND, an important week on the calendar for any music industry big-wig or fan alike, has a unique recipe for it’s success. Take one big dollop of live music, a hefty scoop of brain-stimulating panels, a generous sprinkling of workshops and a peppering of networking, and you’ve got the 3-day conference that is BIGSOUND.

Acts such as 2017 breakout newcomer G Flip, Sydney band I Know Leopard and recent triple J Unearthed winners Keelan Mak and Austen have been added to the live-music line-up that already seemed too good to be true. These freshly announced artists will join previously announced acts such as Olympia, Cable Ties, Moaning Lisa and more.

If over 150 musical acts playing their own showcases over 4 amazing nights of music is not enough for you, BIGSOUND have also announced a number of legendary official parties. Let your hair down after a long day of hobnobbing at any number of these events including the Secret Sounds/The Music after-party and two closing parties on the Friday night presented by Milk! Records and Fat Wreck Chords, featuring performances from Loose Tooth, Hachiku and Lindsay & Jay from Frenzal Rhomb. 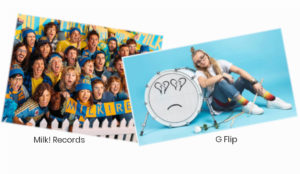 Thirteen spectacular visual artists have had the title of BIGSOUND Visual Arts program custodian bestowed upon them, leaving them with the exciting responsibility of transforming Brisbane’s Fortitude Valley into a creative wonderland. In addition to this, eight emerging leaders of music technology have been announced for the BIGSOUND Music Tech showcase, which will operate within the boutique BIGSOUND Gallery trade show. These innovators will promote new technology relating to online streaming services, apps for accessing live music and live music tech that attempts to collapse the boundaries between the present reality and the future of creating electronic music.

Don’t be fooled into thinking that BIGSOUND is all live music, panels and parties however. There are multiple opportunities for artists and industry to connect with each other and expand their skill-base over the week. As one of BIGSOUND’s event partners Ableton will present two masterclasses over the conference, allowing participants insight into the creative process behind a set built in Ableton Live. These masterclasses will be run by Beatrice (Haiku Hands, Kardajala Kirridarra) and Paces, an up-and-coming producer out of the Gold Coast.

Final tickets are still available to BIGSOUND, don’t miss out on your opportunity to discover all the goodies that this year’s festival has to offer.