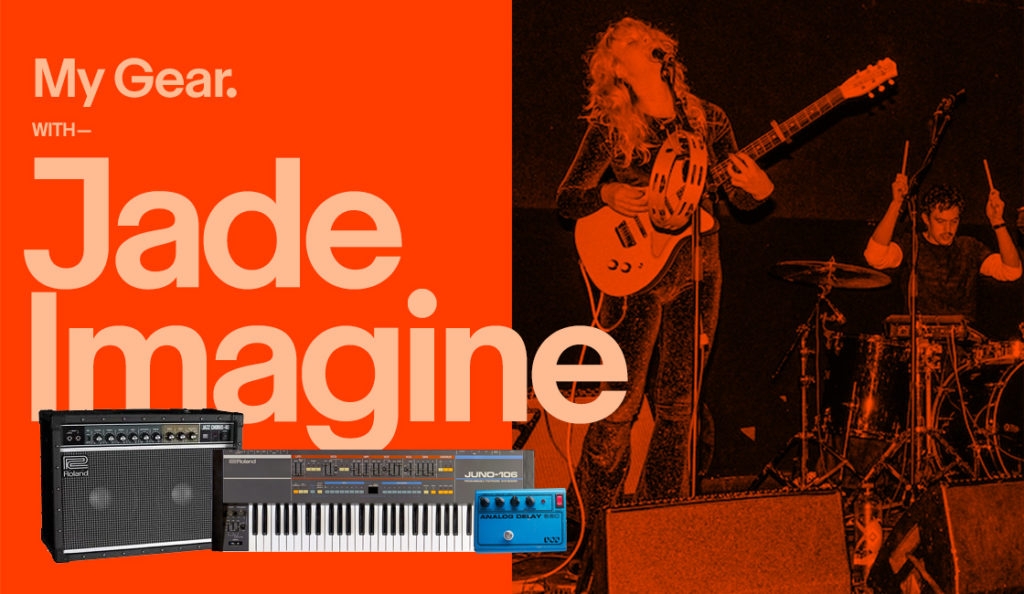 Jade Imagine are a ‘low-fi, slacker-fuzz-dream pop dream band’ from Melbourne. Lead by multi-instrumentalist and songwriter Jade McInally (Teeth and Tongue, Jess Ribeiro) the band released their debut EP What the Fuck Was I Thinking on Milk! Records in early 2017. Following an appearance at this year’s SXSW in Austin, Texas and gearing up for the release of their debut album, Jade sat down with Noisegate and let us in on some of the secrets behind the band’s signature dream fuzz sound.

Heya Jade, walk us through Jade Imagine’s current live set-up.
Our live set-up is pretty similar – if not identical – to our recording set-up. Two guitars, bass, kit and synth. Tim plays a 1980 Gibson ES-335 through an old 70’s Peavey amp, with a TC Electronic Flashback 2, which is a touch sensitive delay pedal, and a Boss LS-2 that he uses for a boost. His set-up is super simple – a “less is more” approach… we call him the “Barking Dog”, reminiscent of the sound of his guitar. Tim and I share an ’80s Roland Juno 106 synth, playing it on different songs throughout the set. James plays a full drum kit with a Roland SPD trigger pad, which has a few ‘key sounds’. For example, a drum machine taken from my Yamaha PS-20 keyboard, a vocal sample we used in a song, etc… Snowy plays an early ’70s Greco Jazz Bass through whatever amp’s going at the time. He uses a modded Boss-OD-2 for drive and this weird bass synthesiser delay pedal. Then my set-up is a Baritone Danelectro through a Roland Jazz Chorus 77 amp. The pedals I’ve accumulated are a Boss RV-6 for reverb, an extremely old and temperamental DOD analogue delay, a Hot Cake for drive (borrowed from Tim) and that’s it. I use the manual chorus setting on the amp, which is built in, because it sounds so nice. Nice, do you expand on that setup when in the studio?
With the new album we just recorded, a lot of our focus was on structuring the instrumentation for the songs in a minimal way and keeping it as close to the live set-up as possible. We live-tracked the album, all playing in a room together, with minimal overdubs, aside from Tim (who put his parts in later) as he was the one engineering and pressing “record”. So the theory is that the shows we play from here on in will sound pretty close to the actual recordings! Plus, we wanted the album to have the feeling of just the four of us playing in a room together… the upside of this meant that the new songs are way easier to recreate in a live setting, because we’ve already recorded our parts and they’re good to go!

Would you say your gear is integral to your sound?
For me personally, I think yes, very much so. I play a baritone guitar and I use chorus and verb; and all those things equal the sound of “me” (my nickname is “Shards of Glass”). Same for Tim (AKA Barking Dog). His guitar is so distinctly “him” sounding. We did have to play a few shows where his guitar was in the shop getting a set-up, and I remember feeling like something was off about our sound.
But yes I do feel that our gear is integral to our sound; the natural tone and timbre of our individual instruments compliment each other and occupy different sonic spaces.
A month ago I finally bought a second Baritone guitar and it’s a huge relief because before every show I’d be shitting myself about breaking a string or anything because if I did, there would be no backup guitar as no one plays baritones around town!

What was the first piece of musical equipment that you ever bought (or came into contact with)?
The first musical instrument I came into contact with was my dads late ’60s Maton Alver Hollow Body. He’s still got it actually. The other instrument I had growing up was a Casio SK-1 sampler keyboard… it’s one where you could record sounds via a little microphone and then play them back on the keys, at different pitches and speeds. I had it throughout my young life and then when I was in my early 20s I let my friend try to circuit-bend it, but he fried it instead. I didn’t say anything at the time but I was pretty sad about it. They’re kind of expensive now too… Oh well! Gear will be gear.

What is a dream piece of gear that you would love to own?
How do you narrow it down to one?! Okay fine. If I had to choose, I’d really love to get a guitar custom made by Jon Shub one day. Maybe a baritone, but maybe not… I sold my regular scale Fender Jag earlier this year with the intention of buying another regular scale guitar but I ended up getting another baritone instead. So I should probably try and get one at some stage in case I wanna play a “normal” guitar!