One of the biggest surprises we encountered at the recent Winter NAMM Show was Korg’s apparent commitment to DIY electronics. Tucked away in Hall E amidst a cacophonous sea of guitar and PA speaker manufactures was the Korg Nu:Tekt booth. Albeit modest compared with Korg’s primary booth upstairs, the Nu:Tekt booth was brimming with (generally) fully functional prototypes and mods, and perfectly suited to the adventurous off-kilter vibe that Hall E exudes.

Granted, our attention naturally gravitated towards the various synthesiser and effect pedal variants, it’s worth noting that the Nu:Tekt product catalogue officially extends into audiophile territory with the inclusion of the HA-S Nutube equipped headphone amp.

As gear crazy as musicians often are, it doesn’t seem unreasonable to assume that many will go their entire lives without investing in a valve headphone amplifier. That being said, if there ever was a convincing argument to dabble in this market, the Nu:Tekt HA-S does a pretty good job of conveying it. I put these ‘stereophonic arm-twisters’ into 4 categories:

Just as with its NTS-1 synthesiser counterpart which we looked at in a recent article, the HA-S headphone amplifier does require assembly. Fortunately, this is less cumbersome than almost any IKEA job we’ve encountered, and as Korg tirelessly proclaims, there is no soldering required.

It’s not difficult to imagine members of the audiophile community taking some level of umbrage with the notion of this degree of requisite post-sale assembly, however for us here at Noisegate it’s a huge selling point. Not only for the fun of piecing components together but also for the accommodation of future modification. Which brings me to stereophonic arm-twister #2…

The logical next step of any DIY project following completion is modification and Korg have taken significant steps to encourage this ‘upgrade’ mentality. First, with the inclusion of a “premium audio oriented MUSES01” op-amp, in addition to the preinstalled “industry-standard NJM4580”, and for those with a heightened DIY instinct, circuit diagrams are included for further component tinkering.

Audio enthusiasts will often talk of ‘rolling’ components, the idea of switching out parts in order to achieve sonic deviation and it’s great that Korg have included additional parts to get you started on this journey.

The HA-S has only just started shipping so the level of community engagement here has yet to reach that of the super-popular NTS-1 synthesiser, but once you have this headphone amp in your possession, the temptation to loosen those easily removable top panel screws and start tinkering will weigh on your mind and slowly drive you crazy, much like the once beating heart of that corpse buried under your couch.

Once assembled, we were pleasantly surprised by the sonic quality of the HA-S. Although our level of auditory gratification was no-doubt bolstered by the previously described DIY efforts, the HA-S provides an immediately apparent improvement from a general enjoyment perspective compared with the default experience of connecting headphones to standard consumer-level headphone amplifiers found in laptops and phones. Adjectives such as ‘rich’ and ‘deep’ spring to mind and this is largely due to the inclusion of a Nutube, Korg’s modern, energy-efficient take on archaic yet lust-worthy vacuum tube/valve technology.

Keep in mind, the Nutube does noticeably colour the sound, so the HA-S mightn’t be your first choice in a purely studio/critical listening scenario. The Nutube ‘colour’ is however very pleasing for general music listening and we were happy with its performance with any audio we threw at it from Hot Jazz to Vaporwave. For those moments when frequency manipulation is less than desirable, a negative feedback switch can be engaged to reduce the Nutube’s overall impact on the sound. 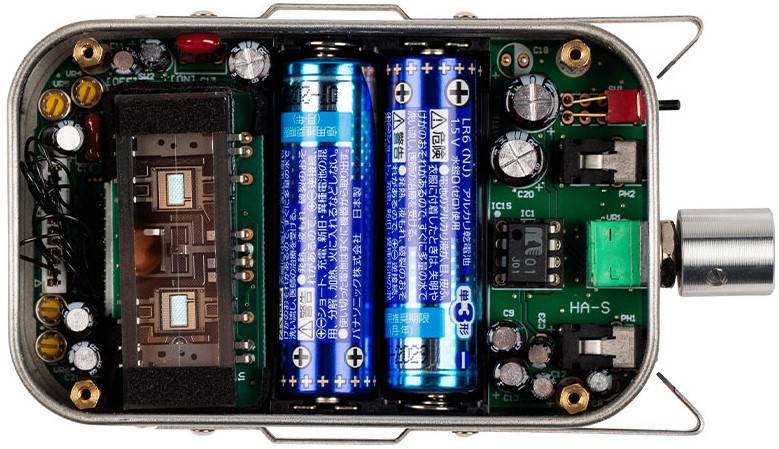 At just north of $500 AUD, the HA-S probably won’t be the impulse buy / stocking stuffer that the NTS-1 synth is, but we’re talking about a genuinely high-quality audiophile piece of kit here. Valve headphone amps (even portable ones) are nothing new, however, Nutube technology is, and its inclusion here, as opposed to traditional valves, has a variety of notable benefits. Nutube for example:

Operational Amplifiers or op-amps are, as their name implies, voltage amplifiers used in a variety of electronic applications. Possibly every electronic audio capable device you can imagine from mixing desks to mobile phones uses op-amps at some point. The Nu:Tekt HA-S has an NJM4580 op-amp pre-installed which (amongst other things) is commonly found in guitar overdrive pedals. The included user-installable (rollable) MUSE01 is more commonly sighted in higher-end audio/HiFi products.

For those sceptical about the sonic characteristics of Nutube compared with traditional valves a written review can only go so far, but it has our full endorsement. As mentioned, Nutubes are just starting to really hit the market but we’ve already seen them appear in a variety of devices including the Volca NuBass, several Vox guitar amps and even Vox’s recent reissue of the Continental Organ.