CRAFTsynth 2.0 is a monophonic wavetable synthesiser from Modal Electronics and shares the same form factor as their SKULPT synthesiser. Craft is considerably smaller and cheaper than SKULPT, but sounds dramatically different. There’s really nothing else that sounds like it anywhere near this price point.

It’s remarkably compact and light and can be powered by USB or batteries. There’s a built-in 8 note keyboard with 29 preset scales to choose from plus a custom scale which you can program yourself. The keyboard itself doesn’t support velocity or aftertouch however the synth engine does, so you can connect an external controller via MIDI and then velocity and aftertouch can be used as assignable modulation sources. 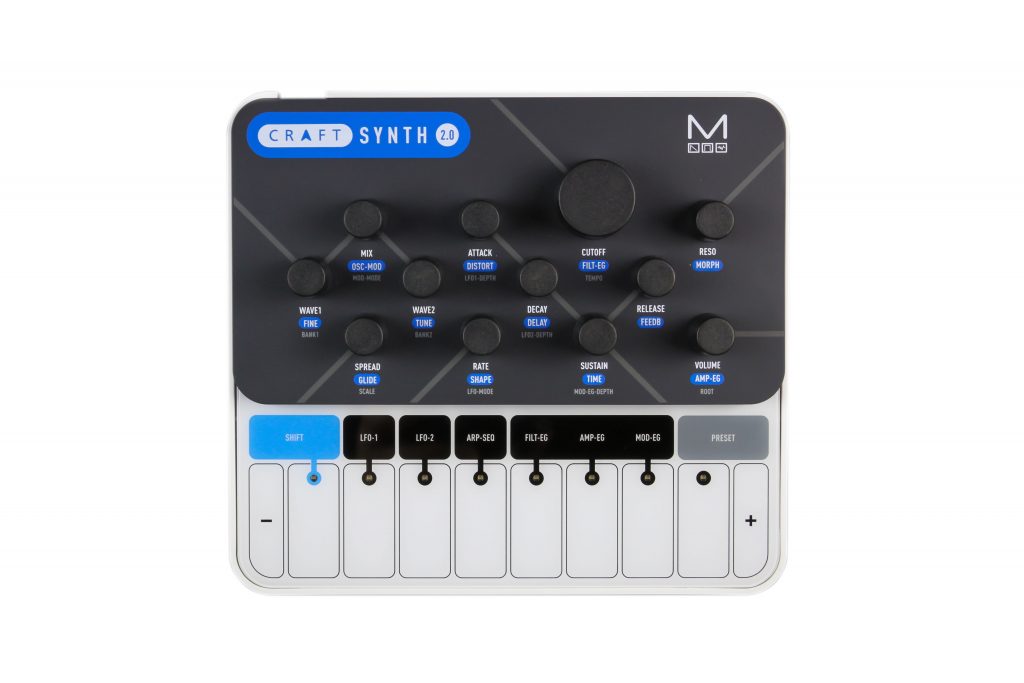 Octave up and down buttons are conveniently located at either end of the keyboard and additional programming buttons are located above. The shift button gives the 12 front panel knobs a secondary function as highlighted in blue, and the preset button is either used in combination with the 8 keyboard buttons to recall presets or as a second shift button for a third layer of control functionality indicated by the grey text.

As with SKULPT there’s a free editor program available which works either stand alone or as a plugin. Whilst extremely useful, the entire synth engine can be operated entirely via the front panel without the software editor, hence the 2 shift buttons.

Craft is monophonic yet it has 8 oscillators and can produce 2 simultaneous waveforms. There are 8 banks of oscillator waveforms, each with 5 unique shapes which are freely morphable. This covers a range of categories from your standard virtual analogue shapes like saw and square, through to complex digital shapes derived from Modal’s high end 002 synth. Multiple Craft synths can be poly chained allowing up to four notes of polyphony.

The 8 oscillators can be detuned in unison using the spread function, or split into intervals including octaves. As well as the 3 envelopes and 2 audio rate LFOs, Craft has a distortion and delay effect, as well as a programmable arpeggiator.

Now available in Australia through the Modal Electronics dealers: