When it comes to the sounds of classic rock n roll and boogie woogie piano playing, there are few that match the prowess of Ezra Lee. Working with some formidable names both on the national and international touring circuits, including the likes of Wanda Jackson as well as local legends Doug Parkinson, Nick Barker, James Blundell and Dave Larkin (as part of the “Ultimate Rock n Roll Jam Sessions”). Ezra also keeps an incredibly packed local gigging schedule, currently playing in The Heartbrokers (Jeff Lang, Ash Davies, Van and Cal Walker) and Johnny Green’s “Blues Cowboys”.

We were able to catch up with Ezra and talk uprights, grands, mics and when these stunning (and on occasion not so stunning) instruments are not at his disposal, Ezra’s digital piano of choice.

So what’s your go-to piece of gear and why do you reckon it’s awesome?

My gear is upright and grand pianos, different ones every night. I use my 2 x USA made Radio Shack PZM plate mics that are taped to the sound board. One for the low end and one for high end.

How have you integrated it into your live show?

We used to play pretty loud when I started and I did get bad feedback as the vol went up, so a guy who was Johnny Winter’s piano player, Ezra Charles in Houston, Texas sent me his invention called The Helpinstill, it is 3 big guitar pickups that are magnetic strips and go under the strings on the iron frame of grand and upright pianos. Because it works with vibration only there’s no feedback, so I can get pianos so loud your ears would bleed!

I still use those pickups where I can but when the gig hasn’t got a piano, I use a Korg SV-1. It was built to get all the vintage sounds like Hammond Organ and Leslie speaker, Whirlitzer and Fender Rhodes. The piano settings are killer too and the keyboard has great tone and reverb settings, I like the low notes in the mix when I’m playing Rock ‘n’ Roll and boogie woogie, so this keyboard is great for that.

Yep, any time I see a piano at a gig I use it, even if the tuning is slightly or a lot out!  It sounds really wild. I remember playing in Queensland on the back of a truck and this piano was in bad shape, so in the solo I took all the keys off, through them out to people and then pushed the piano off the side of the truck, it smashed into pieces and the crowd went crazy!

Sometimes the pianos have had beer spilt in them and broken keys, busted strings and cigarette burns all over and more but all just adds character to it and I love that I have a different instrument with different qualities every night, whatever is at the gig.

A trick is sometimes they are built with tough metal gauze on the back, covering the soundboard and you have to kick holes in it to get the mics taped on (do that while the publican is not looking!) or tape the plates under the piano lid. I always try to take off the front panels of a piano that way no matter what’s going on I can hear it loud and people love seeing the hammers move, not many people know that pianos just clip together. I like to tear the piano up mid gig, the look on people’s faces is priceless. 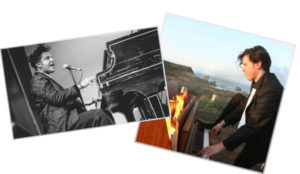 I’m playing the Blues Train a lot this year as well as lots of bar gigs in Melbourne.  I have the first Friday monthly res at The Dogs Bar in St. Kilda and I’m touring Europe again for the third time this year for a month starting in Dec. I released an album this year called Copycat Killer a tribute to Jerry Lee Lewis and I’m also releasing an album of Gary Young songs feat. Red Rivers on guitar, Gary Young (Daddy Cool) on drums, Andy Scott on bass, Steve Williams (John Farnham Band) on sax.