Fuzzsucker has been typically described as the most energetic force in live music ever. With well over 33 releases (which covers around 120 of his songs), it’s no wonder he has been described as the best one man band in Melbourne and the fifth best in Canberra. We sat down with Fuzzsucker to find out about his hoarding of gear, his unique favorite guitar and what exciting plans he has in store for the future…

So what’s your favourite piece of gear and why do you think it’s awesome?

A second hand jet black Pearl River Stratocaster rip off. Pretty sure it would have come in one of those beginner guitar packages with a guitar case, lead, strap, 3 guitar picks, instructions, and amplifier included. It’s awesome because it was free and it was my first – and you never forget your first.

Where did you find it?

In the gutter of the carpark at Erindale Shopping Centre Wanniassa (circa 2008).

This guitar is the equivalent of a beaten up car or a broken video game controller – you need to know how to hold it just right to get anything out of it. Beyond the standard lead jig routine, the volume knob needs to be cranked beyond capacity if you’re going to have any chance.

The pickups were loose from the time I found it, so if you tip the guitar forward or shake it furiously you can get this incredible screech clank sound out of it as the pickups smash against the strings.

Imagine a kid jumping up and down on their bed, hitting the roof, then chipping their tooth on the bed frame when they land. The kid screams out to their parents in agony. 80 percent of the scream is because their hurt, but the other 20 percent of audible emotion is the fear of getting in trouble for jumping on the bed and getting blood on the carpet. That’s the sound the guitar makes when you activate the loose pickup string attack shakedown feature. 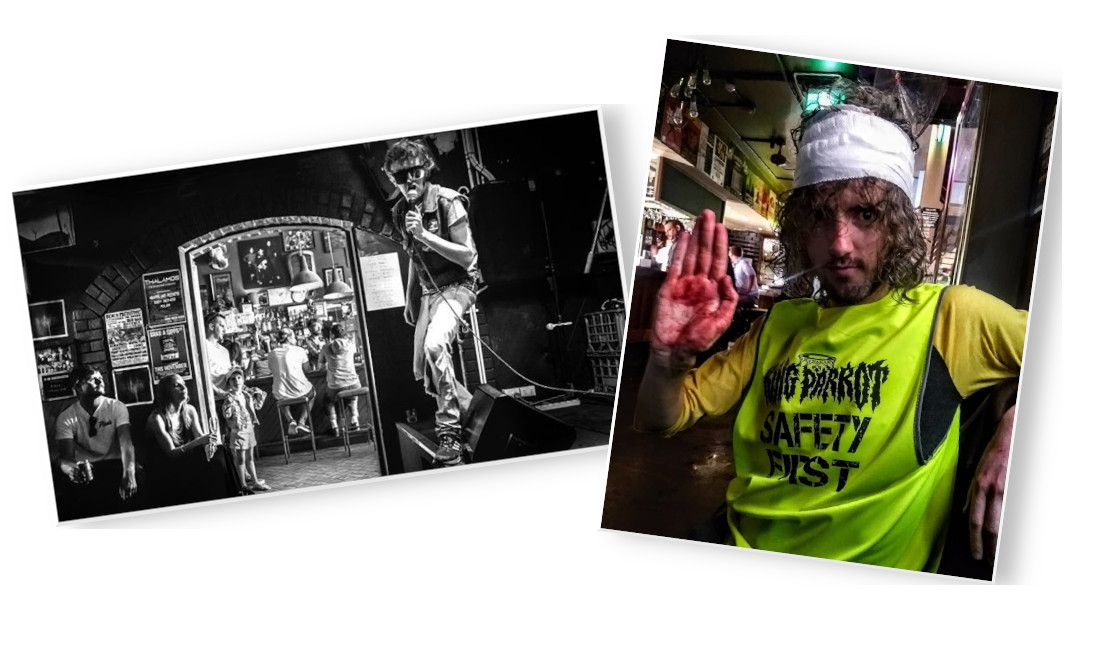 Have you modified it all? Why?

Big time. I have bent the 5-way selector switch in a downwards direction, otherwise you won’t get a signal….and even then it’s hit and miss…a hot tip is to cycle furiously back and forth on the switch, while maintaining that downward bend. The back panel is long gone, so the springs are exposed – the rust from being left in the rain is prominent. In fact, cosmetically it’s gone through quite a bit; scratches, chips, blood, you name it…I don’t wish to endorse the practice of putting stickers on instruments – but this one currently has three that I put on myself: Canberra Raiders, 2xxFM, and Guitar Wolf. Canberra Raiders because they are the greatest football club in the country, 2xxFM because they are the greatest radio station in the world, and Guitar Wolf because they are the greatest jet rock ‘n’ roll band in the galaxy.

Although I am a hoarder, I tend to gravitate towards single bits of gear for long periods of time. I’m really into discarded instruments -I’ll use anything I can get my mits on – usually it’s the gear I’m not familiar with that spark the strongest flames. I have this 8 string instrument which I suspect is a Bouzouki. I found it at Tiny’s Green Shed in Canberra – and it’s been a staple in my recordings ever since.

The beauty of an instrument like that is you can experiment with it in ways someone who knows how to play it wouldn’t ordinarily dare. Tuning it differently is one thing, cracking open the back wood paneling, shoving a mic in and using it as a percussion instrument is something else.

Over the years Fuzzsucker H.Q has developed into a safe space where micro aggressions are not tolerated, and wonderful trigger warnings and inspiring instruments are welcomed. The gear I’m currently using includes (see: inclusive) a brown carpeted Lowrey organ with room to stand on it like a mountain goat, a Korg Monotron Analogue Ribbon Synthesizer (used by my good friend The Blade Winner during a one off live performance of The Rich Album), a Stylophone bought in Japan but made in China, chord organs (my favourite: the Emenee Audion Duette Electric Reed Organ), melodicas/kazoos/harmonicas, banjos, tambourines/egg shakers, a trumpet, a saxophone I bought online (it came with white saxophone gloves, and instead of a traditional floral pattern, it was engraved with the URL for a bargain deals website), a steam train whistle crafted in Tasmania from Celery Top Pine by Mike Hancock (Tibadee Timbercrafts), a Gretsch Electromatic G5120 made in Korea, a Yamaha RBX200 electric bass, a Yamaha PSR 190 keyboard, the KORG Kross Music Workstation, and a conga drum I was inspired to acquire through my obsession with both Marc Bolan and Andy Kaufman. 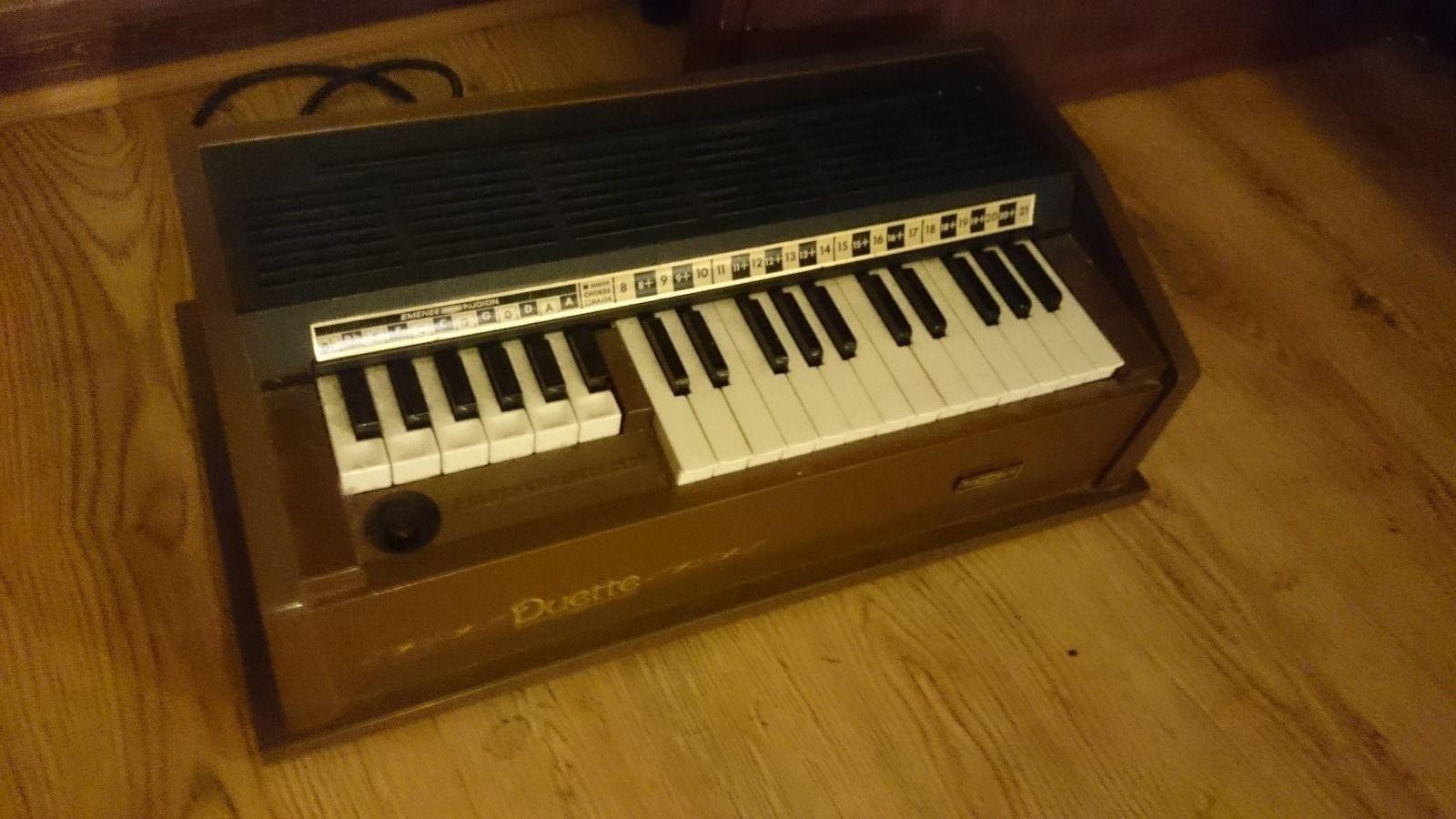 When it comes to amplification I have three choices: a LEGEND LE10D practice amp, a Randall RG75D…or what is in my opinion the greatest amplifier ever built: the VOX AC1 RhythmVOX battery powered Guitar Combo Amp. This beast has a built in drum function and guitar tuning capabilities.  The drum machine has 10 rhythm patterns to choose from with 6 variations on each: Blues, Rock/Metal, Irregular, Triplet, 16 Beat, 8 Beat, Jazz/Funk, Country, Reggae, and Dance. It also has “Songs” (6 song rhythm patterns for those that need a little structure in their life).  Drums too loud or slow? No worries…you can adjust the tempo and volume with ease! It has a mean clean/overdrive switch, along with your standard quarter inch jack input, gain/tone/and volume knobs, a stereo jack aux in, and headphones out.

It must take a lot to run that kind of machinery right? Wrong! This amp packs a knockout punch worthy of Connor McGregor’s left, and all it takes is 6 AA batteries.

Microphones and recording gear is information I refuse to divulge. Get a warrant.

This Friday the 7th December I will be performing at YAH YAHS supporting Mesa Cosa with others. for their “Donkey Shelter Fundraiser Fiesta”.

I’m also currently working on four albums, including a revolutionary Choose Your Own Adventure pro wrestling themed masterpiece. No one’s ever heard anything like it.

In the words of Iggy Pop: Look out honey ’cause I’m using technology. 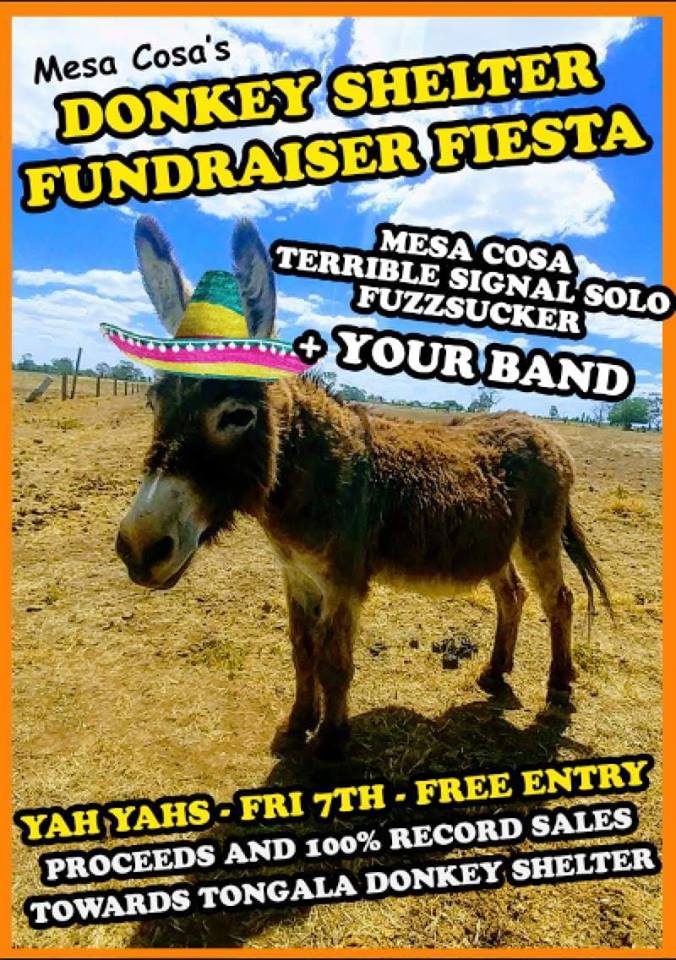