Some very interesting new Eurorack modules announced from Qu-Bit Electronix this morning, it feels like a lot of thought’s gone into their function and what people are looking for in the Eurorack world at the moment. Check em out: 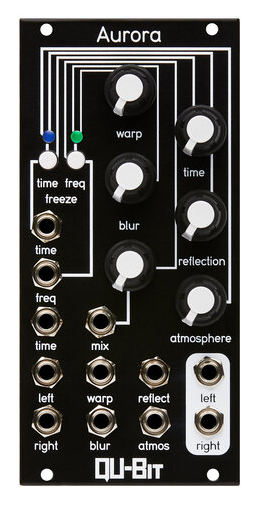 The Eurorack market is pretty light on proper stereo in/out reverb modules, it’s high time someone tacked that hole.  Aurora is a just that, with a full set of of sound sculpting options and a number of extras thrown on top for good measure. From their press release:

“It features a lush reverb algorithm, and a phase vocoder audio engine allowing for spectral transformations of the incoming sound. You can freeze the input signal in the time or frequency domain with the press of a button or gate input. In addition, the reverb time extends all the way to infinity at its highest setting. The Aurora feels right at home on an effects send or in the middle of a voice as a creative sound design tool.” 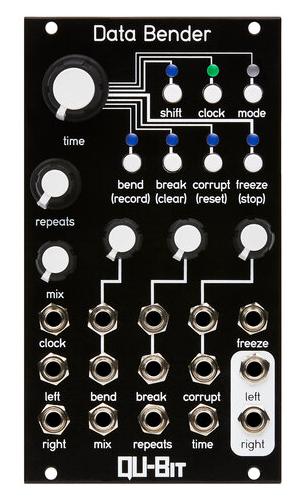 One for the glitch and IDM artists, this one promises to channel the sounds of failing technology – skipping CDs, software bugs, old tape machines and scratched record. It will hold up to 5min of stereo audio in its audio buffer. This is one that we really need an video demo of to appreciate, but it certainly sounds interesting.

With the popularity of Mutable Instruments’ Rings and 2hp’s Pluck, it was only a matter of time until another manufacturer tackled the polyphonic physical modelling idea — and  Qu-Bit have taken it to an exciting level here. 8 voices of polyphony (!), multi-timbral, stereo output and a synthesis engine that’s reportedly capable of ranging from plucked strings and marimbas, all the way to FM drums. This one’s gonna be popular!

Cacade is a ratcheting envelope generator that looks like one of those utility modules that you end up using in all your patches. To quote the press release again, it features; ” burst generation, a flexible curve parameter, and two discrete level controls. Freeze allows you to lock the output voltage exactly where it is with the press of a button or a gate input. The Cascade can be transformed into several other modes, including ASR, ADSR, dual AD, and a gravity-based bouncy-ball mode.”

No audio or video demos yet, hopefully our guys on the floor at NAMM can swing by their booth for a demo.

Check out all the official info here