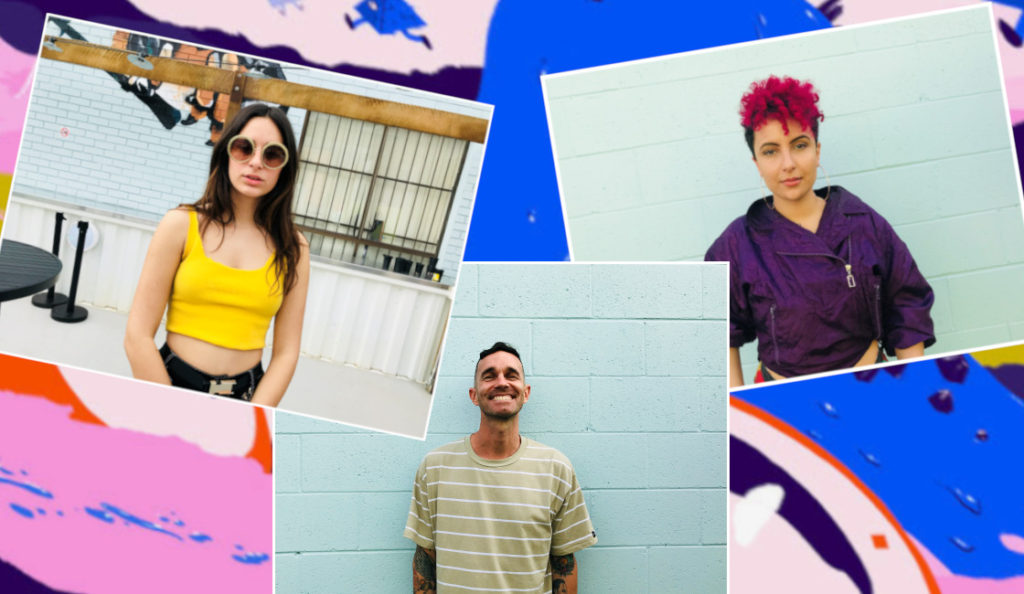 Noisegate attended Bigsound this year and spoke to a few of the amazing artists hitting the stage over the 4 day festival. Based in Brisbane, Bigsound keeps on getting bigger and bigger!  This year 18 venues hosted over 150 acts not including buskers and sideshows throughout the city. We caught up with 3 of the must-see acts and fired a couple of quick one on one’s.

You have a unique sound, tell us about your process & influences when making music?

I feel like when I make music it really comes from within myself, I try not to sound like anyone else. I grew up listening to Artic Monkeys, Muse, Stevie Nicks & John Butler Trio. Even thought they don’t sound like me directly they definitely influenced me when I started to write music.

Tell us about the leap from studio into a live setting?

I have my guitarist who is also my musical director and we kind of sort it all out together, we usually work with a guitarist and drummer live but we are aiming to work with a full line up in the future

A live band with bass and keys is the aim and would really push the dynamics of the band. Live we have tracks running along with guitar and drums to fill out the sound and bring that studio element to the performance.

How do you approach working on new tracks in the studio?

We work with a production team based in Melbourne called ‘Night Flare’  as well as my MD which is really cool. We set up writing sessions with keys & guitars and take it from there, I will usually start the direction of the track depending on how I am feeling and we work together to achieve that feel.

Tell us a bit about what you are doing at Bigsound Festival?

My name is ‘Paces’, I am a music producer here doing some showcases at Bigsound. I am also working with Ableton here as an ambassador, I’m taking a workshop at X Cargo taking people through my live set up and how I have translated my productions into a full live stage show.

Take us through the gear you use live?

So I run Ableton along with a couple of different controllers, a drum pad and a sample pad. I also run a rack unit with a redundancy rig so if one laptop dies mid set the second kicks in instantly and I can seamlessly continue my set and avoid any catastrophes. These have become pretty standard in the festival circuit, producers can’t be caught out with no back ups these days! I always promised myself a redundancy rig when I started to land the bigger shows, it’s not the most fun thing to spend money on but definitely has you covered if or when you need it.

Describe your music and influences?

I think I sit between pop music and underground? I’m into stuff where pop music and club music meet. I do a lot of field recordings and like to splice sounds up a lot. I work with a lot of vocalists and working from scratch on most tracks. Tuned percussion is big on my tracks too, I like using these live with controllers to add to the live performance aspect. I usually pick out 3 main sections where I want to play a different thing, during the verse it may be kalimba sounds then chorus may be chopped up vocal sounds. With Ableton’s automation options I can seamlessly move between all samples and not have to worry about changing them again giving me freedom to concentrate on the live performance aspect of the show.

Tell us a bit about how you describe your sound?

I’ve said it a couple of times this week that I think ‘genre’ is weird these days, but in terms of sound I would say I am definitely based in Hip Hop with rap as a main element, however I love poetry and spoken word is a big part of what I do. Coming from an Egyptian background I like to use these scales musically in my material also. Sometimes I will write a poem and the beat will come as I write, other times it will take a while to come up with a beat for certain lyrics. The process can be different for nearly every track.

Do you choose to collaborate on your music often?

Yes I definitely collaborate a lot when it comes to writing music, a lot of the time I will work with a producer and he will send me beats and we will work out which beat works on different tracks. I will even send a beat to the producer and ask for something similar depending on the track. I’ll sometimes grab 3 reference tracks and take it to the producer and we write from that.

How do you take your studio sound to the live stage?

It’s good to be versatile and be able to travel just on my own with a track but I do love having the energy of other musicians on the stage. Bigger shows will see me have backing singers and even a drummer to add energy to the performance. With backing vocals I can connect in that moment with the crowd, giving me opportunities to take a break and really take in the moment.