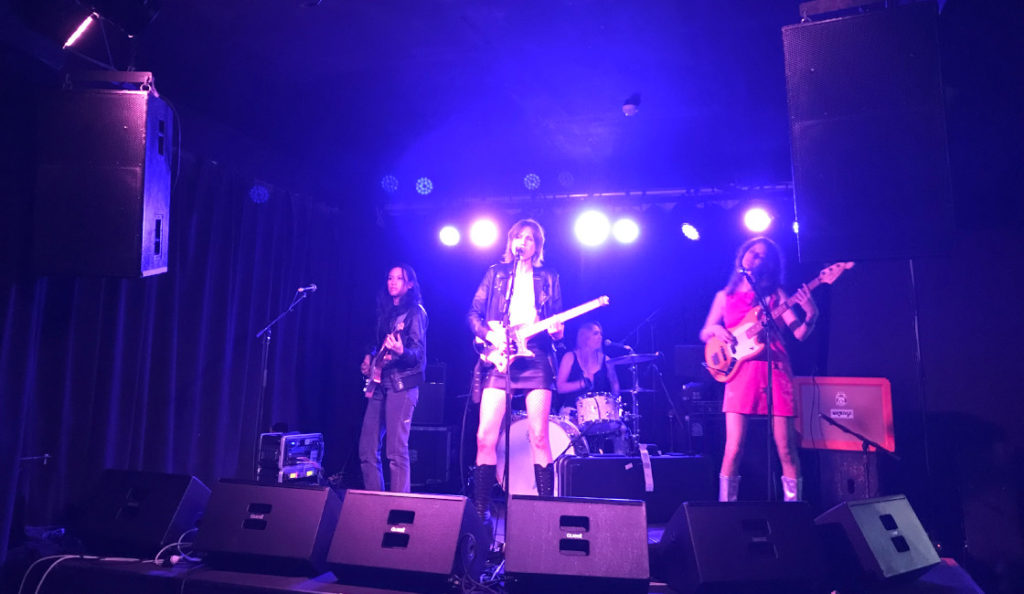 If you’re not already familiar, RACKETT are the blistering all female punk/pop powerhouse from Sydney. The four-piece have smashed out a casual 150 or more gigs in just this year alone, with time still left in the calendar and fuel still in the tank. Noisegate had the absolute treat of being able to catch up with the legends themselves who are Bec (lead vocals, rhythm guitar), Ally (bass/ backing vocals), Kat (lead guitar/backing vocals) and Astrid (drums, backing vocals) before their Melbourne show at the Workers Club, Fitzroy, in the midst of their “Tried to Quit” single tour. RACKETT filled us in on some of their favourite gear, highlights of the year, their love for POND and the importance of them inspiring and helping create a well-balanced musical culture for younger girls. Cheers legends!

NG: RACKETT have been smashing out shows all over the country at the moment. How have you been managing the balancing act of playing massive support shows and focusing on your own headline tours?

Bec: Well I guess we kind of dedicate all our downtime to preparing, planning, strategizing and trying to get some sleep and exercise and write music so yes, we are at that point in our careers where we are living double lives, you know.  We are trying to hold down these nine to fives and we’re just on the cusp on making RACKETT our full-time job, which is all of our, objectives? [All in agreeance]. Yeah, cool, great, we’re all on board yes.  [All laugh].

As an all-female line up who are trailblazers in the indie scene, do you feel that you have a role to play for younger, aspiring female musicians and for woman in general in the music industry?

Kat: Yeah of course, [all agree] we’re here to inspire and to stretch the boundaries and hopefully make it a more well-balanced musical culture for when, you know, girls grow up. Cause it was harder for us when we started and now it’s getting easier and hopefully it continues to feel better.

That’s so great to hear and we totally agree! We love the fact that Astrid was doing live sound for RACKETT before joining the band, does having a live engineer’s perspective in the band help?

Astrid: It’s a dream for a sound engineer. [All laugh].

Ally: It is THE BEST thing to have her onboard. [Bec]: Yeah, absolutely, blessed!

Ally: So good! And you know, just for her to walk in and know her stuff and like she goes in and…

Bec: She’s like to the sound engineer “That’s five decibels like too high or something.” [Laughs. Kat and Ally in agreeance.] “Yeah, yeah it is, yeah dude.” [Kat]: Or like [imitating speaking into a mic] “Oa, oa, that’s around 5kHz, turn that down.” Boom.

Ally: And she’s hooked us up with some sick gear too so we’ve always got the best.

We recently checked out the video about your IEM setup. What drew you towards using the Soundcraft Ui16 mixer for this system?

Astrid: I mean, in ear monitoring has of benefits, but the reason we got the system was because I’m a sound engineer and I was experiencing some, poor sound engineering and this is my way of taking a little bit of control back, plus we can’t afford to ship a sound engineer around with us. So yeah, that’s why we invested in some gear to do our own in ear monitoring.  And I use the console [Soundcraft Ui16] because price wise it fit the bill and it’s got enough inputs for us to have kick, snare, bass, guitar, guitar and four vocals AND click and we can mix it all and yeah, that’s why we got it so that we have a little bit of control. 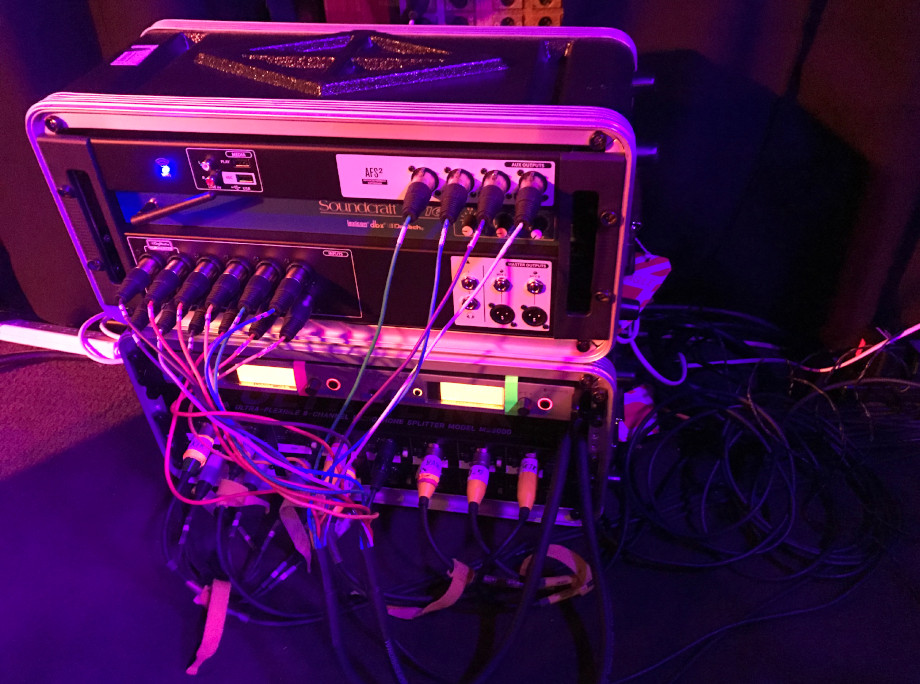 That’s a really cool cost effective and efficient way to have more control over your performances. And with the Ui having four aux outputs you each have a mono output for you IEM’s, right?

Astrid: Yeah that’s right. So we use two Sennheiser in ear monitoring units and we’ve got two packs with each. So, we just split it left and right and then yeah, we’ve got Bec’s on left, Ally on right, on one unit, and then left and right [between Kat and Astrid]. Yeah, yeah it took a while to design the thing but it works.

Astrid: It’s as much of a burden as it is a good thing, it’s a real pain in the ass sometimes. I mean anywhere from dealing with venues and explaining what it is that we’re doing through to dragging it places and charging our rechargeable batteries in time. And you know, having our in ears fall out and all that kind of stuff, it takes a while to get used to but it’s worth it.

Kat: It’s a tool. We all want to give it our best foot forward at every performance we do and that’s just another way. Like if we can hear ourselves, then we feel comfortable, we’re more likely to play really well and I think it’s worth the haul.

That’s really cool. Are there any pieces of gear/setups you would like to get in the future that would enhance your live shows?

Bec: Yeah, I definitely want ah, yeah, I think BOSS have just brought out a new wireless lead system so I want that. I mean, yeah in terms of gear, like I’d love some new leather pants [All laugh] and some… [Ally]: Those new fluffy Cons? [Bec]: Yeah, those new fluffy Cons and there’s a few really important pieces there.

Ally: It all adds to the performance. [All in agreeance, laughs]. 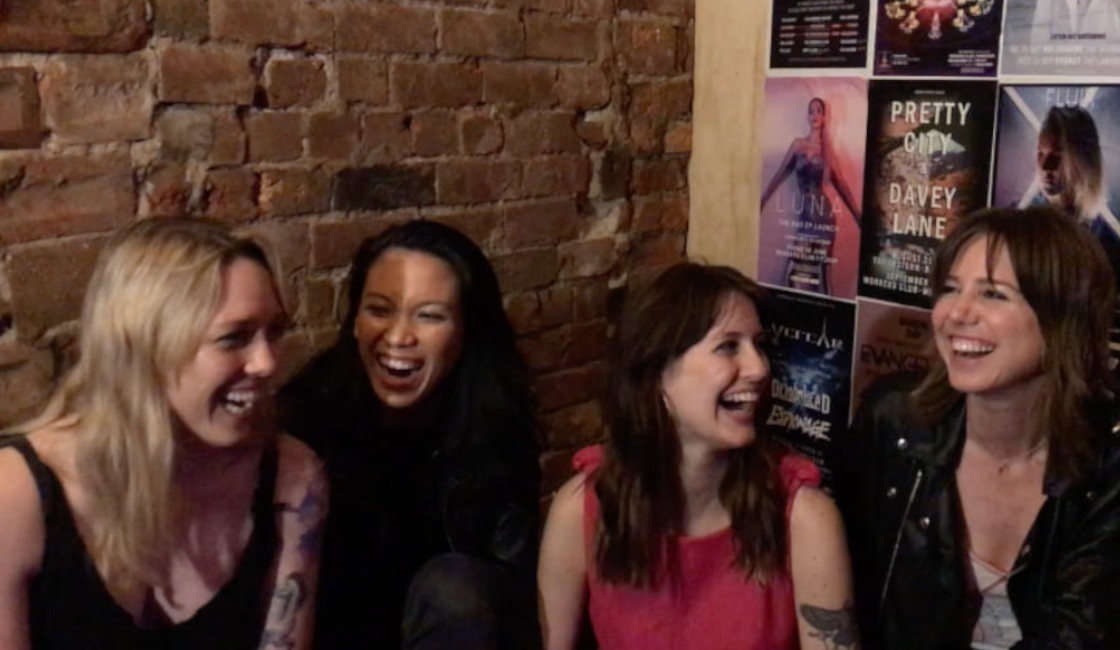 Too funny. You are easily one of the hardest working band on the Aussie touring circuit at the moment, what’s the importance of having reliable, quality music gear to play night after night?

Bec: Yeah, we are tour junkies. We just, it’s really hard to say no because that’s like, when we’re on stage is like the fun-est place on earth. [Ally]: Yeah, there’s nothing better. [Astrid]: Yep, chasing that, that high. [Laughs].

Ally: Best of the best at the moment. These two [pointing to Kat and Bec] have Strandberg’s (guitars). They’re ergonomical, they’re… [Astrid]: They go in the overhead locker on the (aero) planes.

Ally: I absolutely love Fender, always reliable. So, we really have collected our gear and our pedals and worked really hard on getting things that we’re like, “this ain’t gonna fail.” [All agree]. [Astrid]: And it’s going to sound shit hot. [Ally]: Yeah, exactly.

That’s really awesome! What have been some highlights for RACKETT this year from engineers you’ve worked with or venues/festivals you’ve played at?

Bec: This is Edvard, he’s one of our favourite sound engineers in Melbourne.

Ally: It’s the best to work with him. [All agree].

RACKETT: Thanks Edvard, we’ll see you back out there.

Bec: Yeah, so we were talking about highlights yeah? So, we’ve just released our new single “Tried to Quit”, which for me is a huge highlight, really excited about that song. It’s definitely my favourite song I’ve ever heard in my life. [Laughs]. [NG]: It is an absolute banger of a tune!

[Bec]: Absolute banger. [Ally]: Wow! [Laughs]. [Bec]:  No, no that was a bit cocky but honestly, it’s amazing. [Ally]: But it’s now, its filmed. [Bec]: That’s ok, it’s the truth. [Ally]: It is the truth. [Bec]: You’ve gotta believe it, you know. [NG]: You’ve got to be in it to win it. [Bec]: Exactly. [Laughs]. And then, yeah, I guess we’ve been touring, like we’ve been on a tour, I don’t think we’re ever not touring this year, so we’ve been playing everywhere. We’ve got some new, what else have we done this year? [Ally]: I already know what I am really excited about is playing with POND. [Bec]: Oh yeah that’s going to be fun. [Ally]: That is at a festival called Jungle Love, getting to play with POND.

Jungle Love is coming up in December, right?

Bec: Yep. That’ll be the last show of our “Tried to Quit” tour. Yeah.

NG: Cool. What a way to finish.

Well on that note, thank you so much for catching up and filling us in on the exciting things you’ve been up and what’s coming up.

Bec: Alright, thank you so much!

Details to RACKETT’s last shows of the Year: