Device-Based Mixing – Getting Your Network in Order 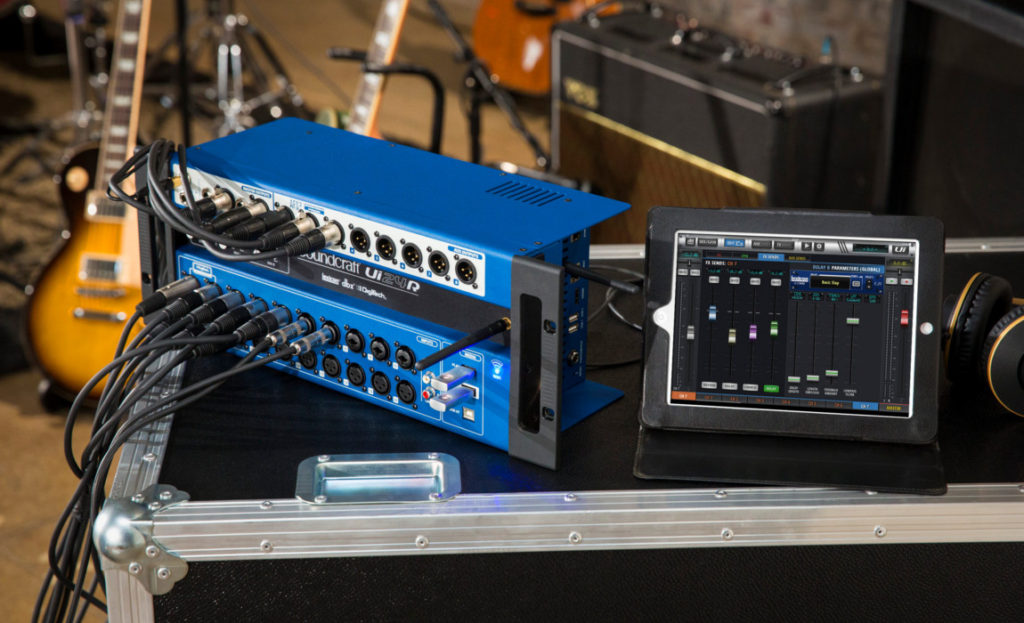 The ability to control mixing desks wirelessly via tablet or smartphone has been a game-changer in pro audio. Being able to control a GEQ from stage to tune a wedge, or walk around and adjust what’s happening in different parts of the room has made sound technicians more efficient and accurate, meaning better mixes all round. It’s been a great innovation for the musicians on stage too – apps on smartphones mean each performer can make basic changes to their mix, and being more comfortable on stage leads to a better performance.

There are, however, some new requirements and workflows that the WiFi revolution has bought us, namely network administration and security. In this article, we’re going to look at some IP basics, good security practices, and handy tips to keep your show running smoothly. We’ll be using the three models of Soundcraft’s Ui Series of portable digital mixers as the examples, but the principles apply to any networkable digital mixer.

You know you shouldn’t use a password like ‘123456’ on the internet, and your digital mixer is the same. Each model in the Soundcraft Ui Series includes a built-in WiFi hotspot who’s SSID is “Soundcraft (model number)” where the model number is either Ui12, Ui16 or Ui24R. The first time you connect to this network, it has a default password of ‘scuiwlan’. After you’ve connected your device to that network, open your browser and type in the URL ui-mixer.io – this gets you into the Ui’s interface.

The first thing you should do is change the default hotspot password – go to the ‘Settings’ tab, find ‘Network Config’. The software will then ask you for the administrator username and password, which are both set to ‘admin’ by default. After log-in, you’ll need to change these too! Now that you’re in, change the password for the hotspot under the ‘Hotspot Configuration’ tab, and then the admin username and password under the ‘Administrator Password’ tab. Note that under the ‘Hotspot Configuration’ you can also change the SSID, set security to WPA2, or disable the hotspot entirely.

While the built-in hotspot is more than capable of running your show, you might decide to use an external WiFi access point that has greater range or more features. Many gigging engineers won’t leave home without their Apple AirPort Express, which has an audio out you can connect to the mixer and stream music from you Mac or iOS device. Connecting external WiFi is also handled in the ‘Network Config’ tab, and requires a little more setting up.

Under the ‘WiFi Configuration’ tab, you’ll need to enter your network’s SSID and password. Under this, you can also choose between DHCP or manual IP configuration. If you choose DHCP, the Ui will handle the allocation of IP addresses for up to 10 connected devices automatically. If you choose ‘Manual’, you’ll need to put your devices and the WiFi access point into the same IP range in order to connect. While this may seem an unnecessary inconvenience, a manually configured network is more secure, as the Ui won’t be handing out IPs to devices that aren’t meant to be connected.

Success in live production can be all about how you handle the unexpected. It’s always a good idea to have a back-up in case of surprises, and when dealing with WiFi and RF, you are dealing with something that can be negatively affected by a range of environmental, electrical, and human factors. The Soundcraft Ui Series all have Ethernet ports to connect a Mac or PC via Cat5 as a back-up controller in the event of WiFi or device failure, and settings for this can be found under the ‘LAN Configuration’ tab.

Filtering – not just for signal!

If you’re using an external WiFi access point, it’s likely that it supports MAC filtering. Every networked device on Earth has a unique MAC (media access control) address in the form of a 48-bit, 12 character hexadecimal number. You can look up this number on an iPad, for example, under Settings-General-About-WiFi Address. You’ll see something like ‘D0:D2:B0:E2:6F:7A’.

For total network security, get into your WiFi access point’s settings and find its MAC filter – it’s often under ‘Security’ or ‘Advanced’ tabs, depending on the device. You’ll need to note down all of the MAC addresses of the devices you want to be able to access your network, and then enter them into the MAC filter fields. After setting and activating this feature, only those devices will be able to connect to your network.

When you’re deciding on which device-based mixing system to purchase, you need to take into account who will be connecting to it, and they devices they own and prefer. Most digital mixers use a dedicated iOS or Android app for remote control over WiFi, some with the option for a desktop application for Mac or PC. Some operate on iOS exclusively.

The Soundcraft Ui Series use an HTML 5 interface, meaning that any device that can run a browser can connect, regardless of its operating system. If you’re working with multiple musicians who would like to control their foldback mix via iOS, Android and Windows, or hiring your desk out to engineers who all own different devices, the flexibility of HTML-based control platform will save you a lot of connection headaches.

Why Shopping Online Locally For Music Gear Is Better Than Overseas