Sender Spike is an independent developer dedicated to releasing free, high quality music tools — and their latest is no exception. The SN03-G Tape Recorder plugin emulates the character and saturation of vintage tape machines in a highly CPU-friendly package.

Why tackle something that’s been done many times you ask? Sender Spike answers that themselves:

“Why do something that everyone, even their grandmother and her dog, has already created? Well, the answer is simple. None of the emulators I’ve tried, and I’ve tried many (free and commercial alike), fulfilled what its authors promised.
My gripes were mostly of two kind–either the plug-in sounded nothing like what it supposed to sound (some even didn’t sound at all O_o), or it was (somewhat) in the ballpark of an analog tape machine but it ate my CPU like chips, so, there went that fabled “cumulative effect” of using multiple instances per session.
Long story short, here I am happy as Larry, because I finally have a tape sound emulator of my dreams” 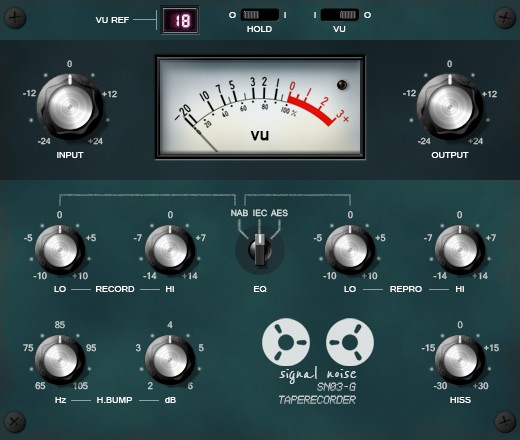 They didn’t do a demo of how it sounds (why some developers release plugins without a demo is beyond me, but it’s free so whatever), so I’ve done a really quick clip of it being used on a stock Ableton Live clip below. On the first few bars the plugin is turned off, on the following bars I’m tinkering with the settings and exploring it’s features (particularly how dirty it can get).

As you can hear, the saturation is pretty bloody nice. And I can confirm, it’s extremely CPU friendly. I also really like how it can be used subtly for a slight lo-fi character right through to all out, ‘this tape’s had petrol poured on it’ type thing.

Highly recommended. PC only for the moment, you Mac users will have to wait.