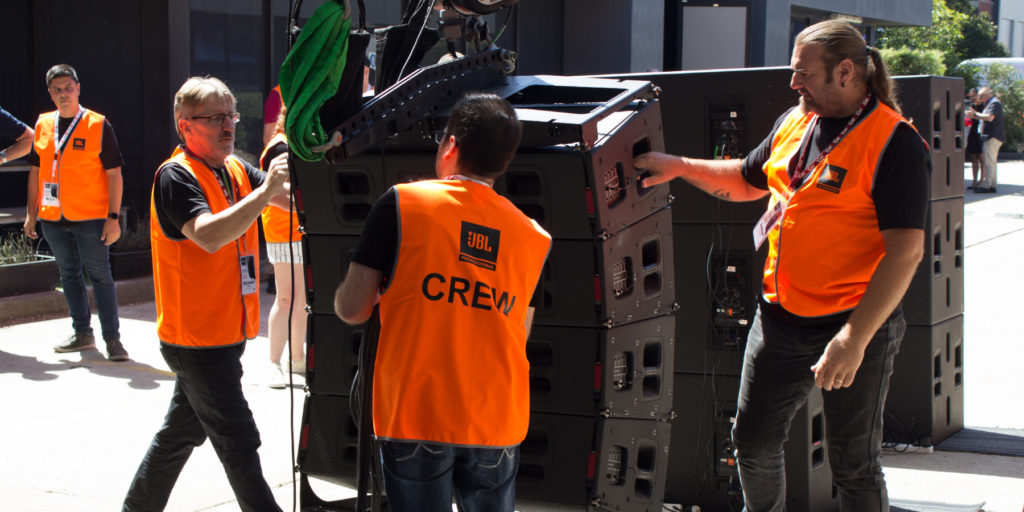 Over two launch events in February and March, Australia and New Zealand audio professionals have been introduced to the new JBL A8 line array and the verdict is in: this is not the JBL of old. This is a huge step forward in tonality and design that engineers need to hear in person to truly appreciate.

The JBL VTX A8 has been designed from the ground-up by Harman to deliver smooth HF, easy rigging, packing and tracking, and sonic performance the equal of its European counterparts. The A8 combines two 8” woofers, four 3.5” midrange drivers and two 2” high-frequency drivers in a single low-profile cabinet. It’s a bi-amped three-way design that utilises JBL Differential Drive™ woofers and Slip Stream™ ports to deliver bass response down to 49 Hz. Using the same HF compression driver across the A-Series means you can run the A8s with the A12s and get a perfect sonic match, while the simple rigging means fast set-up and pack-down.

Making a major splash at The Grammy Awards in February, two hangs of VTX A8s joined four hangs of JBL VTX A12 to cover the music industry’s night of nights at The Staples Center in LA. With 21,000 discerning ears in the audience who all produce music for a living, it was a baptism of fire for the new boxes, which delivered on their promise.

George Georgalis, Product Manager, Tour Sound Amps, Speakers & DSP at Harman International has been instrumental in launching and promoting the A-Series and made the journey to Australia to attend the launch February A8 launch event, where he spoke to Noisegate.

“The A-Series is all about the audio quality,” he explained “We’ve engineered A8s and A12s for much better response across the spectrum, going for a smooth a sound as possible. This has been made possible by making innovations in our driver design and build. It’s important to understand how much work and engineering went into these boxes. Nothing in them is an off-the-shelf component. Once you learn about the technology in the enclosure and then go to a listening session, that’s when you get it.”

The VTX A Series, including the A8’s larger sibling the A12, have been responsible for a renaissance of JBL line arrays on touring riders. Some riders are requesting VTX: A-Series and VTX: V-Series as their first preference, and they’re commonly appearing on the list of accepted PAs. “No touring sound techs or systems engineers are rejecting these systems,” reported George. “JBL’s touring line array products are at the same level as their major competitors and totally satisfy the customer’s needs and wants.” 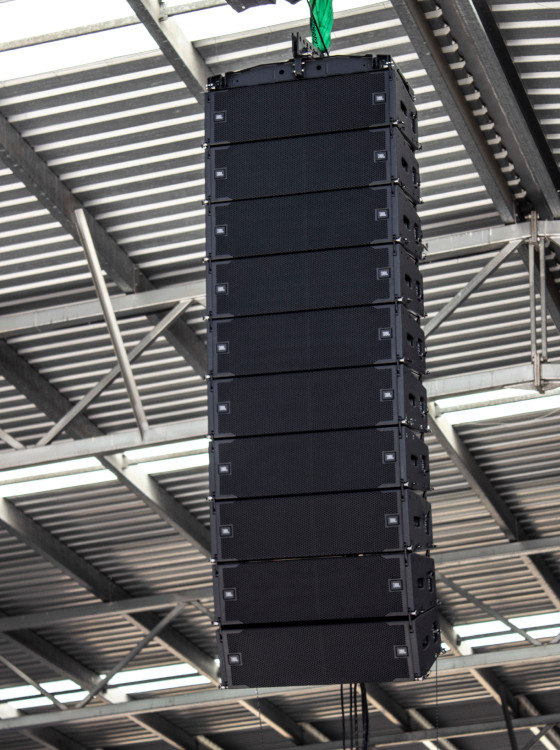 JBL’s parent company Harman have gone on a buying spree over the last few years, adding multiple companies to the stable whose existing intellectual property feed directly into developments in hardware and software for touring PA. The Netherland’s Duran Audio, for example, acquired in 2013, brings both electro-acoustic and software-based knowledge to the R&D team while existing Harman brands BSS and Crown are constantly improving the DSP, electronic, amplification, and control platforms.

“Harman has been through a process of bringing all of its acquisitions together,” elaborated George. “We now have all of the pieces of the audio puzzle. Harman has consolidated the engineering teams into a few facilities so we’re all closer to each other. We have our own dedicated software development team, and we’re putting all our know-how together into pro audio products that are packaged correctly, easy to deploy, and easy to use.”

Part of the international resurgence of JBL in pro-touring is due to the company listening to and acting on feedback from the global network of venues and production companies. “We’ve listened to our customer base and we know all their pain points,” George sympathised. “We’ve learnt what we’d been doing well and what we hadn’t. In some of the aspects of our pro products like packaging, accessories, and transportation, we realised we’d lagged behind our competitors or just been very US-focussed. We paid attention and we’ve addressed that. Our touring products are now better for it. People now just need to get in front of it and listen, which they can do now in Australia with CMI’s demo system out on the road.”

After the A8 listening test, the CMI audio sales team demonstrated just how easy it is to strike, rig, and fly the A Series by dropping the 10 A8s and replacing them with eight A12s. Two people can easily achieve a changeover of this size in minutes, and the A8s were ready to roll into the truck on their carts of four with fantastic efficiency.