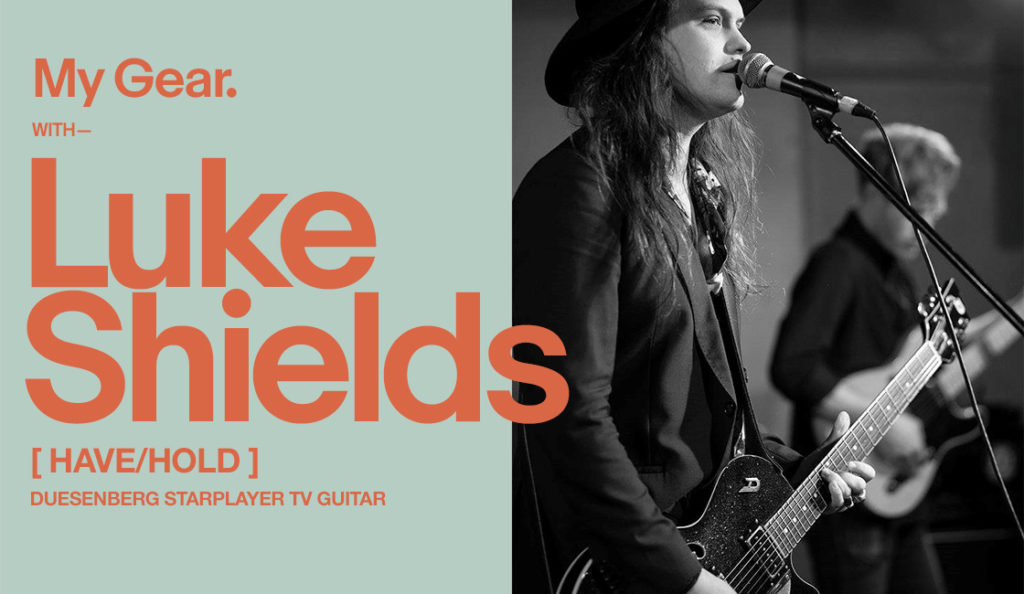 Falling somewhere between indie, punk, ’90s alt-rock, post-rock and whatever other label you want to slap on them, Have/Hold are a somewhat unique band in the Melbourne band scene. At times channeling fist pumping punk sing-alongs, at others a more somber reflection on life, love and loss. Luke Shields is the band’s undeniable frontman, belting out goosebump-inducing pitch-perfect vocals while effortlessly strumming out emotive guitar lines that hop along the fence of the aforementioned genres. With album number two nearing release, we caught up with Luke to chat about his latest love.

Heya Luke, so what’s your favourite bit of gear at the moment?
For about the last six months, my favourite piece of kit has been this Duesenberg Starplayer TV. Aside from being deluxe as with its sparkly blue finish, it plays like a dream. It is super roomy along the neck being Strat scale length on a Les Paul shaped body and the pick-ups just seem to have this openness and clarity that none of the other guitars I’ve played or owned quite come close to. 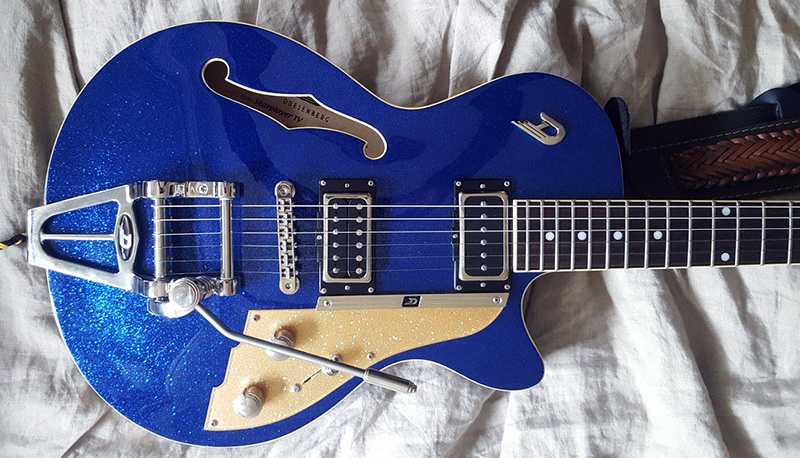 Very nice. How does it fit into your arsenal? Has it had an impact on your song-writing process?
It definitely has a lot of songs in it, but the Duesy really wants to write cool parts with me as opposed to whole songs. I’ve been really lucky in my choice of guitars so far in that they’ve all had a different sense of story telling in them. My ’91 Sheraton used to be a bit of a brat but it has definitely matured, especially since being joined by my Electromatic G5620T. They all sit around my house waiting to have long conversations these days, which is good but when the Duesenberg is out it wants to talk to the others as much as to me, which has been great in the band context.

Sounds like a lovely civilised little family you have. Has it affected your live shows for the better?
Yeah it definitely has and in a really profound way. In Have/Hold it’s allowed me to sit in alongside Yam’s (second guitarist) bright and gritty Tele tone in a more comfortable way. The tremolo system on these things is really great too, very stable and reliable where tuning stability is concerned, so I’ve found myself playing with it in a similar way to the surf-rock-Bigsby in hand thing. I’ll reach for it after just about every strum and do these long, woozy rides that just sound epic.

Have you modified it at all?
Not at all! They all come ready to play with an unconventional string gauge on them, 10-50, which just seems to be the perfect, syrupy tension along that neck so I haven’t really wanted to.

Any tricks to using it you’re willing to share?
The openness and headroom in the pick-ups loves compressors. I’ve had a Keeley Compressor+ at the start of my chain for a long time but it wasn’t until I plugged the Starplayer in that I could hear it pumping like a pair of lungs. That compressor into a nice, long analogue delay into my Supro Coronado and Fender Hot Rod Deville in stereo gives me this ‘La Noise’ era Neil Young and Daniel Lanois harmonic richness that I’ve been chasing for years!

How did it come to be yours?
I work at a guitar store in Melbourne and it was hanging on the wall. My credit card trembled for a few months before I finally gave in. Haha

Are you a gear hoarder or do you tend to gravitate towards single bits of gear for long periods of time?
A bit of both I guess. I haven’t been able to bring myself to sell any piece of gear since I started collecting but I wouldn’t say I was a hoarder – I don’t have THAT much stuff. Sure I have my first, nu-metal friendly Boss Xtortion but that doesn’t mean I have a problem does it?

What’s in the foreseeable future for you?
Have/Hold is just tying up the loose ends of our second full-length album now. We’re about to send artwork of to the printers so as soon as we get all that back we’ll hit the road and I’ll definitely have the Duesy in the back of the van. We’re proud to the point of awe with the way Greg Rietwyk (producer – Press Club, Neighbourhood Youth) made the tracks sound so hopefully we can do it justice.