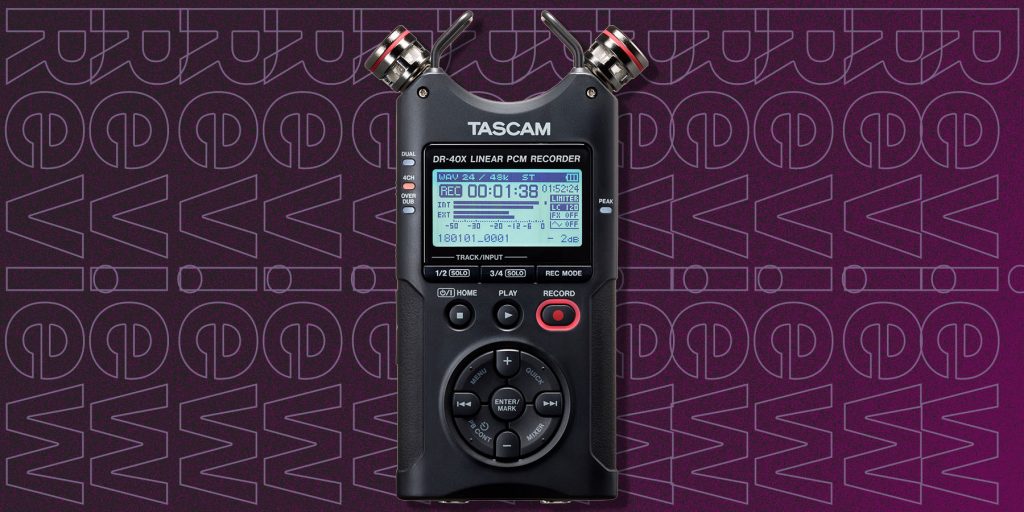 A handheld recorder has got to be one of the most versatile recording devices on the block. Portable, battery-powered, offering high-quality audio capture and can be used for a wide variety of recording purposes. From recording interviews, live gigs, to DJ sets, foley for film and more, a handheld recorder can be the friend of musicians, sound designers, journalists and content creators alike.

Thankfully there’s a bunch of options available, from simple entry-level stereo recorders to more sophisticated, multi-channel devices. We recently got the chance to test out the new Tascam DR-40X handheld recorder. Released at the start of 2019 and an update to the industry standard DR-40, we were excited to see what this new model had on offer.

At first look, the DR-40X looks very similar to its predecessor. Albeit, when turned on, the new LED screen jumps out immediately, being brighter, more modern and steering away from the slightly dated look of the previous orange screen of the DR-40. The new screen is a clear upgrade and possesses more visibility in challenging lighting environments. Other than the screen, the only other real noticeable aesthetic difference is the red bands that surround the two onboard condenser microphones, which really pop and look slick. The unit feels sturdy yet portable and its ergonomic design is easy to navigate all essential controls. 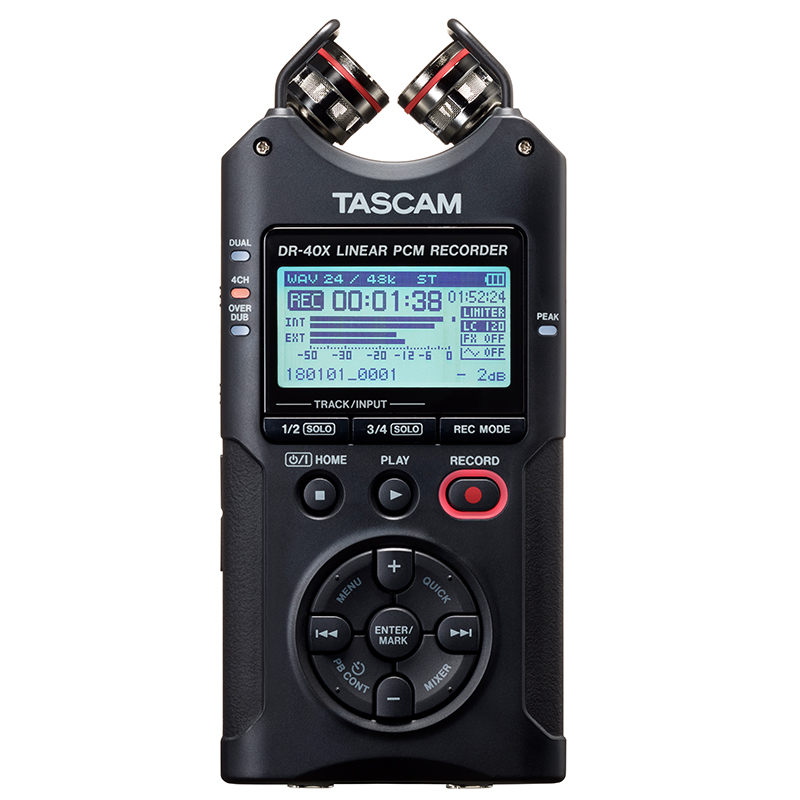 A healthy dose of new features has been added to the DR-40X, with the most notable being a USB 2.0 audio interface (compatible with both Mac/iOS via CORE audio and Windows via ASIO driver download). This is a super handy feature for those wanting a device that doubles up for handheld recording tasks and recording directly to the computer. You can also use the USB connection for efficient file transfer from SD card. Some other updates include overwriting recording mode, for quick punch-in recording, dictation mode for efficient playback and transcription of the human voice, a feature that will be lapped up by journalists and content creators. More SD card storage has been added too, now enabling the use of SDXC cards up to 128GB.

No Messing with a Classic

Those familiar with the previous model will be pleased to know that the features that made the DR-40 so popular have been retained in the newer DR-40X. The life saving dual record mode, which allows for two separate recordings to be stored, one at the dialled in input level and the second recording being attenuated between -6dB to -12dB, saving you from the terrors of accidental clipping during recording. Overdub recording, pre-record and auto-recording modes are still available, plus the built-in chromatic tuner for those musicians needing to tune-up before hitting record and reverb for a touch of ambience if required.

The Devil is in the Detail

In our recording tests with the DR-40X, we wanted to firstly take it out to capture some fine detail atmospheric and foley type recordings, testing its stereo field in both X/Y and A/B mic configurations. Mainly being outdoor recordings, we employed the use of the AK-DR11GMK2 accessory pack, which includes a furry windshield and handheld grip, perfect for our applications. What we noticed straight away was the level of depth that the inbuilt condenser microphones picked up, capturing close up water sounds of a creek in exceptional detail. What’s more, the detail of distant bird sounds in nearby trees gave our recordings a sense of depth and clarity, which was quite impressive. Moving the handheld recorder around whilst recording gave a real sense of 360-degree scope and realism when being monitored and listened back through headphones.

We also tested the DR-40X in a more conventional acoustic guitar and vocal recording scenario. By attaching the recorder to a mic stand and putting it into the A/B mic positioning, we are able to achieve a fantastic level of separation between vocal and guitar, aiming each built-in condenser mic at the respective sound sources. Again, like the outdoor atmospheric/foley recordings, we were impressed with the level of detail and clarity captured.

It’s nice when an update on an industry-standard such as the DR-40 comes along and the new features are clearly thought out and clearly intended for the end-user in mind. The new DR-40X is packed with modern features and further expands its handhold with a broader range of recording applications now available. Paired with either the AK-DR11GMKII or AK-DR11C accessory packs, the DR-40X unlocks its potential further for use with DSLR cameras, outdoor handheld recordings and more.

Staying true to the features that made the original so popular, the DR-40X will be right at home with users that require a simple but high-quality audio recording, to others who require more complex processing, with larger card storage and long battery life. Another solid recording device from the pros at Tascam.