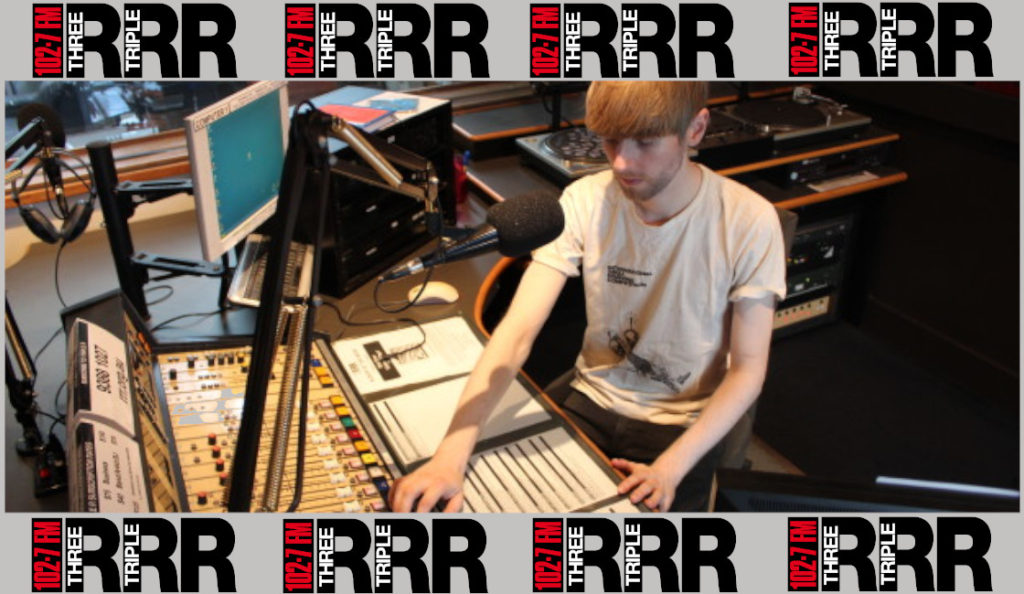 Triple R is truly the heavenly gates of community radio in Melbourne. After all, being a station that has supported local and international artists for more than 40 years whilst being run off the back of hundreds of passionate volunteers is no small feat. The programming of the station is incredibly diverse and boasts a listenership of an estimated 440,000 weekly. Each of the 60 on-air programs (aside from the daily Breakfasters program) are presented by a different volunteer broadcaster who brings their own personal passion and taste to the airwaves. The shows are often genre or scene specific, meaning that the station playlists can include music as widely varied as pop to punk rock… R&B and electro to jazz, hip hop, country and metal*. Of course, due to the flourishing Australian music scene, the station is often inundated with new music submissions and it is up to the station Music Coordinator, Simon Winkler to ensure that these new discoveries reach the ears of the appropriate program hosts.

Noisegate sat down with Winkler to discuss his rise through the ranks of Triple R from volunteer to Music Coordinator, and discover what it is about the Triple R community that makes it such a sweet and integral slice of the Melbourne music pie.

How did you become involved with the Triple R community? How did you progress through the station to hold such an important role as Music Coordinator?

When I moved to Melbourne I was working as a producer for SBS, and became friends with a number of people who were involved at Triple R. Woody McDonald, the Music Coordinator at the time, and as a broadcaster, invited me to contribute as a volunteer and I was lucky to fill-in for a few programs over the summer one year. A couple of years later the Music Coordinator role was advertised when Kim Jirik was leaving the position to study, and I was very lucky to be offered the job. I remember receiving the call from Kath Letch, Station Manager at the time. Kath asked if I needed some time to think about it, and I couldn’t answer quickly enough to say I didn’t need any time at all. I was so excited and couldn’t believe it.

You’ve recently celebrated 10 years on-air with Breaking and Entering. What is it about this show (co-presented with Live-to-Air Coordinator Lauren Taylor) that has made it a staple for listeners and kept you excited about making it?

Thanks so much for the kind words. Lauren and I feel extremely lucky, it’s definitely a huge privilege getting to share our passion for music and creativity with Triple R’s audience. We’re constantly excited by what we’re hearing and seeing around us in Melbourne, and more broadly in Australia and around the world. Getting to speak with artists about what motivates them and learning more about their personal philosophies and creative processes is a huge source of inspiration for both of us. Every show feels like a chance to share all of this with the Triple R community who share our curiosity.

The Melbourne music scene is so strong and always producing new, exciting bands. What do you see as the relationship between community radio and a live music scene?

A great question, definitely a close relationship – we’re very fortunate, Triple R exists as one part of this extraordinary broader community around us: all the artists, audiences, record stores, advocate action groups, publications, venues, festivals, studios, and more who constantly work to support each other. Right from the start community radio has sought to celebrate new and emerging musicians with airplay. Community radio broadcasters are deeply engaged with the music scenes around them, promoting shows and championing local artists on-air, and online. Our Live-to-Air Coordinator Lauren Taylor, staff and volunteers are dedicated to providing a platform for live performances from artists as well. And our sponsorship team are also focused on ensuring that Triple R is a platform for creative individuals, venues, and other cultural organisations to showcase their work.

What do you think is the most exciting change that you’ve seen in your time in broadcasting? What would you like to see change even more?

So many exciting changes, hard to identify just one. Perhaps even on a technical level, greater access to music making technologies has enabled original forms of creative expression. Triple R is definitely obsessed with following developments in music. It’s also been great to see the growth of online platforms for sharing digital music, making it easier than ever for artists to share their recordings and connect with audiences. And Triple R aims to be as representative and inclusive of the greater Melbourne community as possible, and it’s exciting to hear existing broadcasters as well as new voices bringing fresh ideas, conversations, music and perspectives.[/vc_column_text][/vc_column][/vc_row][vc_row][vc_column width=”2/3″][vc_column_text]As the Music Coordinator of the station, you have such an impact on how an artist’s music will reach potential audiences. How does it feel to watch an artist move through different stages of their career and be a part of that?

It’s completely brilliant to see an artist move through different stages of their career, developing their approach and finding audiences. Seeing scenes emerge, bands form, new genre-names coined, artists grow, and being able to reflect something of all this with airplay is absolutely one of the great privileges of working at the station.

If you had to pass on your job to a new Music Coordinator tomorrow, what would you hope they would bring to the table for the future of Triple R?

Triple R is definitely a place where you’re surrounded by incredible staff, volunteers, broadcasters, and artists. I feel constantly inspired by their passion, enthusiasm and deep knowledge about music – I’m sure the next Music Coordinator would bring that same love of listening, learning and sharing.

The Triple R 2018 Radiothon is on now! Subscribe between August 17th and September 26th to show your support for the station and enter the running to win some amazing prizes including the JBL EON ONE Pro PA system TRAKTOR KONTROL S4MKII and lots more…