If It Ain’t Broke… How Tascam Supports Old School Customers

You’ve gotta love a company that released a professional, rack-mountable dual cassette recorder with USB interface in 2018. Tascam’s sometimes seemingly quaint and whimsical retro product releases are actually driven by the best of business impulses – listening to your customers and giving them what they both want and need.

It’s really easy to get caught up in the excitement of the latest audio tech, and while releases like Tascam’s Dante Compact Processors and network controllable MX-8A matrix mixer get digitally native AV integrators smiling, for every one of them there’s an experienced installer that knows a huge part of their customer base just wants a knob to turn for volume and something that can play a CD.

The death of optical media has been greatly exaggerated. The fact we use Netflix to watch TV at home hasn’t magically destroyed the commercial reality of installations that need reliable and controllable physical playback. Sure, you can buy a cheapo DVD/CD player off the internet for $50, but that saving is going to evaporate pretty quick when you put it in an install and figure out it doesn’t have the connectivity you need and needs constant service visits to stay operational.

Hipsters may have sniggered when Tascam released the BD-MP1 Blu-ray player in October, but it can not only play Blu-ray, DVD, and CD, but also digital media formats from its SD card and dual USB slots, including MPEG1, MPEG2, MPEG4 AVC, VC-1, AVCHD, WMV, JPEG, GIF, PNG, LPCM, MP3, AAC, and WMA. Anyone who’s ever installed a media player into a restaurant, church, community facility, theatre, karaoke bar, or any multipurpose facility just found their new best friend. This thing will take literally anything you throw at it.

The wise tech who has experienced the full range of ‘non-technical user phenomena’ will also appreciate the Power-on Play feature, which sets the BD-MP1 to start playing content automatically on power-up, which in conjunction with the Repeat Mode set to ‘on’ means never-ending content loops untouched by human hands. And speaking of human hands, there’s Panel, IR, and Tray locks to engage if you don’t want people touching things.

While it’s idiot-proof up the front, it’s professional down the back, with HDMI out, coaxial audio out, 7.1 audio out on RCA, L/R out on XLR. In terms of control, it has both Ethernet and RS232 control ports, so the BD-MP1 can be integrated into both the simplest and most complex control environments. 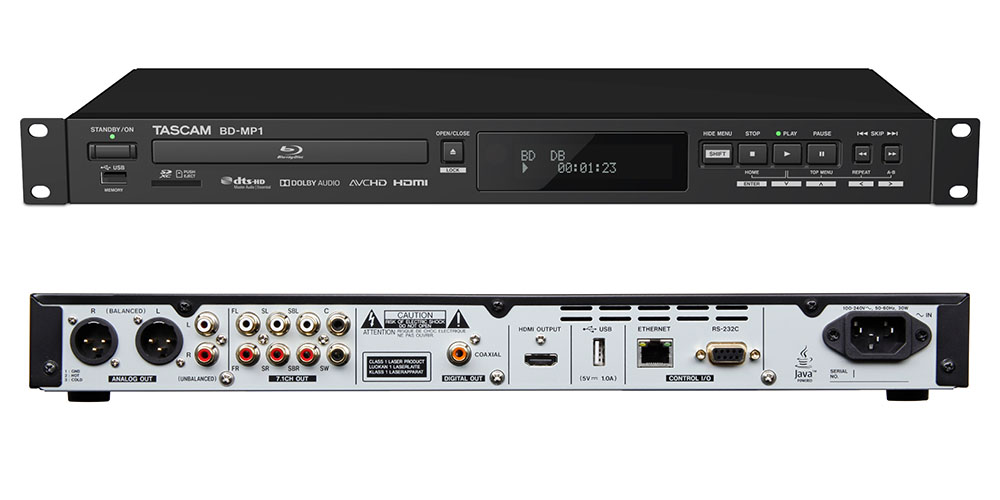 Pairing beautifully with the BD-MP1 is the MZ-123BT 1U zone mixer. Released around the same time as the all-digital MX-8A, the MZ-123BT takes the well-known analogue rack-mount zone mixer format, adds a dedicated Bluetooth antenna, and puts it in a commercial-grade, reliable package.

Its three Zone Out volume pots are clearly labelled on the front panel, and the four inputs have easily understandable output selection buttons above their volume pots. Mic input one has a combo jack input right on the front, and literally anyone could make it work. Everything else more complicated, like Euroblock inputs, pads, HPF, talk over/ducking switches, EQ, and gain settings are safely hidden on the back where only the AV tech will venture. The included Bluetooth antenna means Spotify will never unreasonably drop out again, and there’s a blindingly obvious switch on the front panel’s Input Three-section that users can use to alternate between Bluetooth in and the 3.5mm jack right next to it.

Between the BD-MP1 and the MZ-123BT, audio installs for most of the world’s cafes, bars, multipurpose halls, community centres, and anywhere else people with no audio knowledge, little budget, but a love for music and each other’s company gather, are sorted. And you’re never likely to get a tech support call because someone’s home-burnt copy of ‘Greatest Karaoke Hits Volume 372” they got posted from their aunt overseas won’t play.

Seriously though, why should we as AV techs need to tell our customers that the huge media library they spent three decades amassing is obsolete, and the sleek blank face of their new mixer means they’re not allowed to touch the volume controls? Tascam understand people and love them for their love of audio, even if they do still insist on using cassettes.