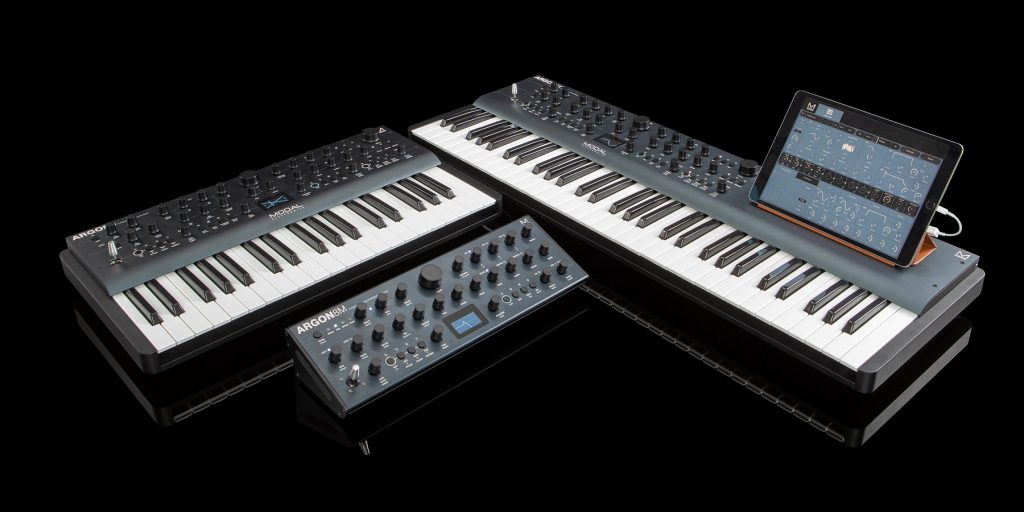 Modal’s Argon wavetable synth may not have made it to Australia yet, but that hasn’t stopped Modal moving forward and expanding the range. The Argon8, announced in September 2019, is a 37-key 8 voice wavetable synthesizer with a fantastic interface and sequencer. Now they’ve ported that synthesis engine and interface to a key-less module and a bigger 61-key version, dubbed Argon8M and Argon8X respectively.

The new additions are 100% identical in functionality and power, the 61-key has an identical interface too, while the module has omitted and moved a number of controls to get it to fit into a standard 19″ rack unit. The module version includes detachable rack ears for desktop use if you prefer.

As you can see, the Argon8X’s interface is aligned to the left, leaving a handy space for small drum machines, pedals, an iPad or the like. Personally, I LOVE when synth manufacturers do this on big boards, it’s unusual that I’ll ever be using just the keyboard after all.

ETA in Australia on the original Argon8 is the end of January, the new models will be available in the Northern hemisphere in February sometime, so probably March before they get to us Downunder.

• True 8 voice polyphonic
• 120 carefully crafted wavetables split into 24 banks of 5 morphable waveform sets
• 32 static wavetable modifiers including, de-rez, wave folders, wave shapers, phase shapers and rectify that can be applied to the 120 wavetables to give a mind-boggling array of permutations and new waveshapes.
• 32 high resolution wavetable oscillators, 4 per voice
• 8 types of oscillator modifier including: Phase Mod (FM), Ring Mod, Amp Mod, Hard Sync and Windowed Sync
• Voice Drift and Width controls that help to create massive stereo soundscapes
• Multiple keyboard modes, Mono, Poly, Unison 2, unison 4, unison 8, Stack 2 and Stack 4
• Inbuilt sophisticated programmable arpeggiator of 32 steps with rest capability with up to 2048 steps before repeating
• Glide/Portamento with both legato and staccato modes
• 4 Filter types
• 8 assignable modulation slots, 11 modulation sources & 52 modulation destinations
• 4-axis joystick that can be assigned to a huge range of modulation destinations
• 3 dedicated envelope generators for AMP, MOD and FILTER that can be accessed independently
• 2 Audio rate LFOs with tempo sync (one poly, one global). Polyphonic LFO can sync to frequency divisions
• 3 incredibly powerful independent and user configurable stereo FX engines
• Real time sequencer with 512 notes with input quantise and four recordable / editable parameter animations (Delay FX, LFO’s, sequencer and  arpeggiator can be either clocked internally or externally)
• 500 patch memories, all fully editable and ships with 300 factory programs
• 100 FX presets
• Quick Recalls accessible from the panel for quickly loading your favourite patches. 8 slots on keyboard variants, and 4 on ARGON8M
• Analogue clock sync in and out (configured to the KORG / Teenage Engineering specification)
• 3.5 mm stereo input with ability to route incoming audio through the FX
• FATAR TP/9S Full size keys with both velocity and aftertouch, 37 on the ARGON8 and 61 on the ARGON8X
• Class compliant MIDI provided over USB connection
• Optional MODALapp software editor available for macOS, Windows, iOS and Android or as VST3