Forget everything you think you know about synthesis. Well, that may be a little drastic, maybe just put it to the back of your mind for the time being. To many, the term synthesis or analogue synthesis, suggests a familiar assortment of voltage controlled oscillators and filters wired in a tried and tested configuration, achieving what is commonly known as subtractive synthesis.

A harmonically rich waveform is produced by layering multiple oscillators’ basic waveforms together. The sound is then sculpted via a filter which, in turn, removes harmonic content.

This concept was popularised by Dr Bob Moog whose company, Moog Music, is based in the east coast side of New York, USA, and produced a myriad of classic subtractive style synthesisers throughout the ’60s and ’70s, including the modular System 55, and the iconic portable MiniMoog.

Around the same time, one Don Buchla (who legend has it, refused to wear matching socks) was busy on the other side of the country designing a very different type of synthesiser. Based in northern California on the west coast of the United States, his company Buchla & Associates shared Bob Moog’s enthusiasm for electronic musical instruments but did so with a dramatically different vision and subsequent execution.

This difference is blatantly evident in Buchla’s most popular synthesiser, (a term he, however, shied away from) the Electronic Music Box, commonly known as the Music Easel which was released in 1973. From its functional case to its funky colour scheme everything about it was unusual, and inevitably confusing to those used to the more traditional wooden end panel and subdued colour scheme stylings of the MiniMoog released a few years earlier.

People are invariably drawn to the unorthodox capacitive keyboard initially, which is, in fact, a flat piece of metal known as a ‘218 touch keyboard’. With non-existent action (zero travel distance), velocity is instead achieved by covering more of each key’s surface area with one’s finger. 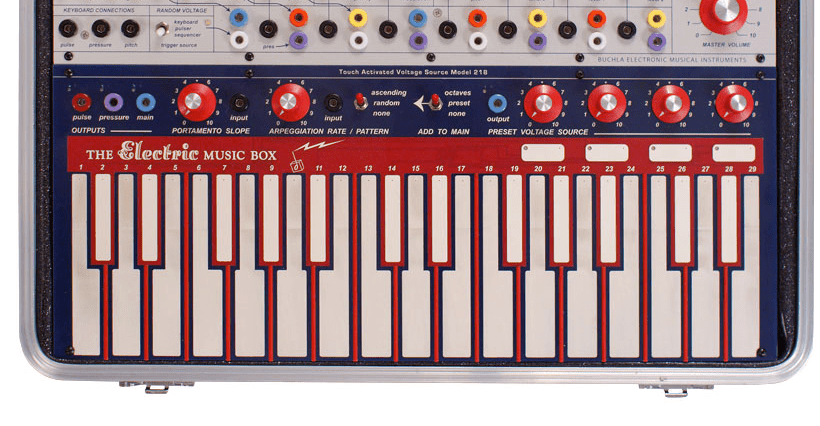 Don’t judge a Buchla by its copper

At the Music Easel’s heart are a pair of oscillators dubbed ‘complex’ and ‘modulation’ which default to sound generation and modulation duties respectively. A colour coded patch bay, however, allows for either to find alternate tasks. Other notable peculiarities include a 5 step sequencer and a real spring reverb tank which can react interestingly to physical stimuli (kicking).

But aside from the obviously omitted typical east coast components, what makes west coast synthesis so fundamentally different? After only a few seconds playing with the Buchla Music Easel (or the faithful Arturia software emulation), you’ll no doubt hear for yourself. The bright timbres, unusual rhythms and eerie ambient qualities will immediately lead you down a very different musical (or often non-musical) path compared with the interaction you may have with an east coast style synth. Once/If you familiarise yourself with the idiosyncratic controls at your fingertips, you’ll be amazed at the range of otherworldly sounds possible, sounds that just can’t be done with standard subtractive synthesis. Plucky metallic percussive sounds and atmospheric drones are especially worth investing some time into.

Generally, west coast synthesis begins with a fairly dull triangle wave which can undergo a timbre bending operation called wavefolding to aggressively add harmonic content (when observed via an oscilloscope, the waveform appears to be literally folding in on itself). This process can be thought of as the inverse of subtractive synthesis without employing the services of a filter.

From here, the signal is by default routed to a Low Pass Gate (LPG), a west coast mainstay component which will be entirely alien to those used to the subtractive method. LPG’s are essentially an amplifier (think volume control) with a low pass filter built in. When the LPG is closed, the output is silent. As the LPG opens, the signal becomes both louder and brighter.

The recently released Volca Modular by Korg is equipped with two Low Pass Gates, and the modular nature of the Volca means either can be potentially used as a more traditional amplifier, or a filter, or indeed both. The default LPG functionality is an important contributor to what is considered the west coast sound.

The Volca Modular also does away with LFOs and Envelopes in favour of two ominously titled ‘Functions’. Just as the dual LPGs can be potentially wired to operate in a variety of manners, the Functions are similarly versatile. Function #1’s parameters of Attack and Release make it ideal for use as an envelope, however, Function #2 features a trigger input which can be fed its own end of cycle trigger creating a loop. In this scenario, its behaviour will now be akin to that of an LFO and its unique Shape and Time parameters make it particularly well suited to this purpose.

As mentioned earlier, the unusual inclusion of a spring reverb tank on top of the west coast style voice architecture further contributed to the Buchla Music Easel’s eccentric sonic personality. The Korg Volca Modular acknowledges this with the inclusion of a very bold digital reverb effect referred to as ‘Space Out’ which immediately imparts a sense of ambience and space (for lack of a better term) beautifully transforming whatever sound the Volca happens to be producing.

As is the case with the Buchla Music Easel, Volca Modular’s two oscillators can break free of their normalled designations via some crafty patching. You may find yourself with two audible oscillators, or an oscillator/modulator combo not unlike the VPM behavior of Korg’s multi-engine oscillator found in the prologue and the new minilogue xd.

Whilst undeniably interesting, west coast synthesis never made quite the impact on popular culture as did the Moog style east coast variety, and as a result, feels a little neglected over the past 50 years. The company now known as Buchla U.S.A has seen difficult times as of late, including Don Buchla’s death in 2016 amidst a difficult legal battle regarding ownership, but remain an active yet niche player in the synth market.

So it’s great to see Korg embracing West Coast Synthesis with the Volca Modular, and the previously mentioned Buchla Music Easel emulation from Arturia is a great way to try this very old, yet suspiciously fresh and vibey phenomenon out for yourself, without getting too overwhelmed (presets are a wonderful thing). If you’re someone who loves diving deep into sound design, the low price points of these modern takes means there’s truly never been a better time to explore the weird and wonderful world of west coast synthesis.