Berlin’s Superbooth synthesiser trade show was especially chockers with new announcements this year, but the major manufacturers like Korg, Elektron, Moog and Novation weren’t the only ones dropping fantastic new products. In fact, it really seemed like some of the smaller manufacturers and DIY types were the ones making the wilder innovations this year. Here’s a round-up of some of the weird and whacky stuff that caught our attention.

SOMA‘s Ukrainian/Russian engineer Vlad Kreimer rocked Superbooth with his completely bizarre take on a drum machine. Drum machine might be a stretch, maybe rhythm synthesiser or percussion synthesizer might be more accurate. It looks like a piece of equipment taken straight from a soviet-era nuclear control room, and when combined with Vlad’s Russian accent, it’s hard to believe he’s not a Bond villain.  At its core the Pulsar’s a 4-voice semi-modular drum-synth / sequencer that runs with 4 non-quantised loopers rather than a traditional sequencer. Oh, and you can use your body to patch modules together rather than cables, so that’s pretty fun and weird. Here’s ya boi Nick Batt from Sonic State getting really excited about it:

Centred around a pair of 4-pole resonant low pass filters, the Meng Qi Wing Pinger is a synthesiser with no oscillators. It involves sending narrow pulses to the self-oscillating filters to trigger sounds, each filter operates independently with symmetrical controls on each side of the unit. It features CV inputs to play with other modular gear as well as audio inputs to process external signals. It can do wild chaos, or some quite beautiful sounds, check it out processing an external synth line below.

Gamechanger Audio have gone and created the first ever electro-mechanical synthesiser, because why not? Lets get all steam-punk on synthesisers (thankfully without the aesthetic). Thanks largely to the emerging drone culture that’s kickstarted developments in small motors that can change frequency really fast, the Motor synth is based around 8 electric motors that act as oscillators. Combined with a sequencer and more traditional synthesiser features like an analog filter..it sounds pretty damn good!

This weird lookin’ synth is a more refined version of the concept the Syntonovo team presented in 2018, and looks lot a more bizarre. The Pan‘s main feature is the ‘XYZpression keybed’ which is a standard looking key-bed that features the usual velocity and aftertouch, plus an additional dimension of expression in which you can wiggle the keys from side to side. Very snazzy. This synth is also MPE compatible and features modular signal architecture. We couldn’t any videos of this new version unfortunately, but you can see an older concept of it here. 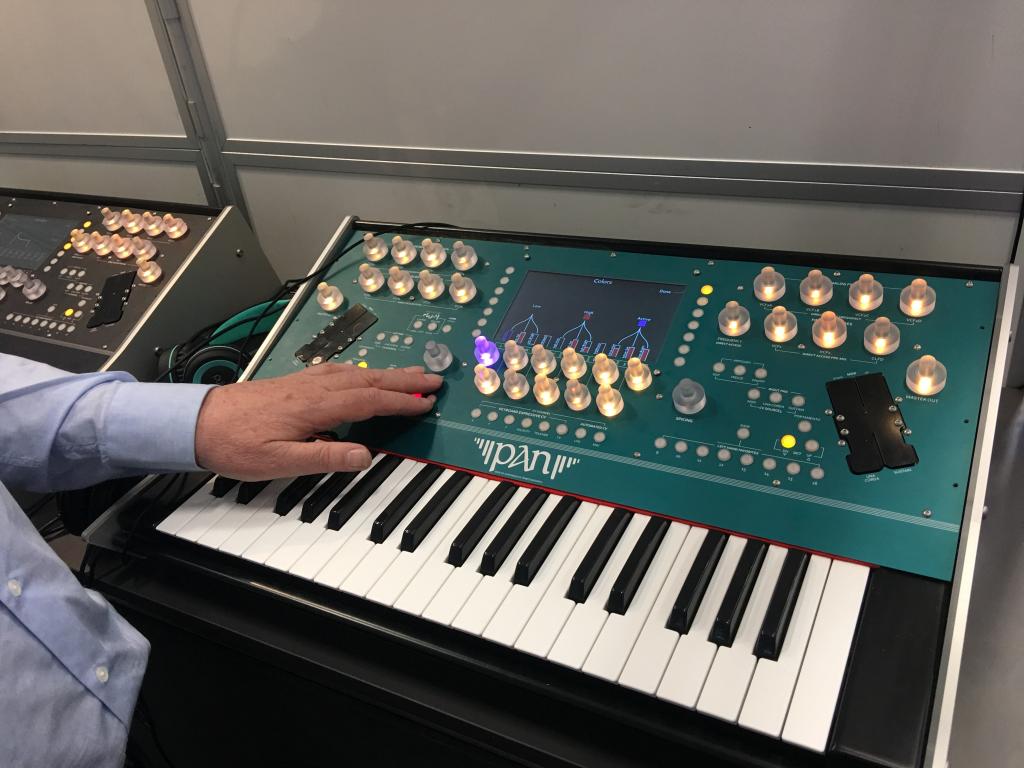 Do you look at  the 8×8-pad grid on Ableton’s Push or Novation’s Launchpad and think “oh wow, that’s a lot of buttons,”? Well behold! Dadamachine’s Composer Pro goes and throws a 16×12 pad grid at you with what appears to be a standalone sequencer that looks very much like Push and Launch Pad hybrid. In fact, the bloke in the video (who looks a lot like a young Ethan Hawke I might add)  below states plainly that it was inspired by the Push and it drove him crazy that he couldn’t use it standalone.  So I guess they decided to just make a standalone version of their own design. Not that whacky really. But hold tight, they’ve also stated that each track could potentially host ‘open source audio engines’, which blows this box of buttons into a hackable, customisable instrument. Very cool.

This is a really simple idea, its surprising it hasn’t been done before (it’s possible it has, but I’m choosing to not research it further, deal with it). This product takes the motor out of a Walkman and make people turn the cassette spindles themselves at whatever speed they desire with a convenient set of cranks. Enjoy all the lo-fi warbly goodness that comes out as a result. The Landscape HC-TT takes the concept further though and adds CV outs, a momentary touch mute function, gain control and a tone control to take fidelity even further down.   It also has a touch operated feedback control that effectively turns your body into an antenna – injecting radio signals, hum and static into the audio. Wild.